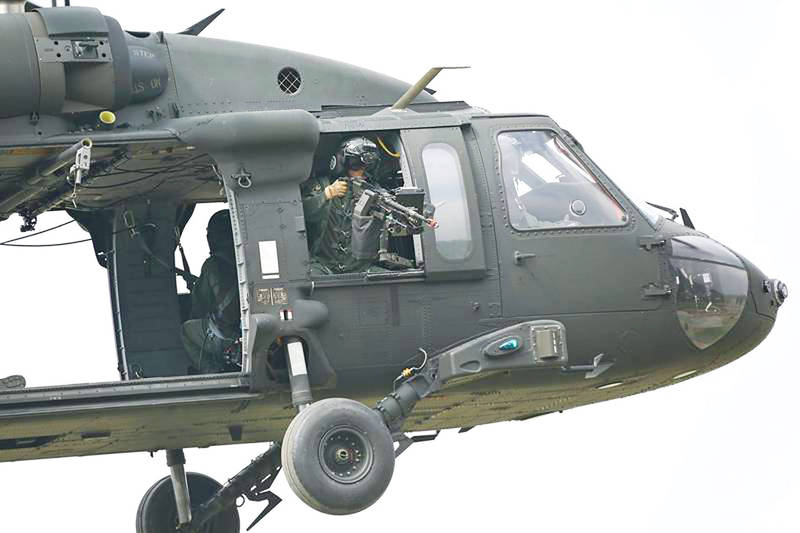 The army is today to begin live-fire exercises in Pingtung County using all of its helicopter models to test its combat readiness, a military source said yesterday.

The Aviation and Special Forces Command is to conduct the annual “Mighty Eagle” exercises until Wednesday at Jiupeng Base in Manjhou Township （滿州）, the source said.

All of the army’s helicopter series are to participate in the exercises, the source said, listing the AH-64E Apache and AH-1W SuperCobra attack helicopters, the OH-58D Kiowa Warrior reconnaissance helicopter, the CH-47 Chinook heavy-lift helicopter and the UH-1H Iroquois utility helicopter.

During the daytime portion of the drills, the helicopters are to fire cannons, as well as Hellfire and Stinger missiles, at targets at sea and in the air, while at night, the Apaches would fire Hellfire missiles at targets, the source said.

Mighty Eagle is the command’s major helicopter drill, which is usually held in the second half of the year to test the aircraft’s capabilities with precision weapons systems.

The exercises involving the Black Hawks, which were armed with M240 machine guns, were the first such drills since the Air Rescue Group was formed in 1950, the military official said.

Although the group is primarily tasked with noncombat missions, the live-fire drills were intended to simulate a wartime rescue mission conducted under enemy fire, the official said.

No further details were given and the air force declined to comment.

The Air Rescue Group operates 14 UH-60M helicopters. The Ministry of the Interior’s National Airborne Service Corps also has 14 of the models, while the army has 30.