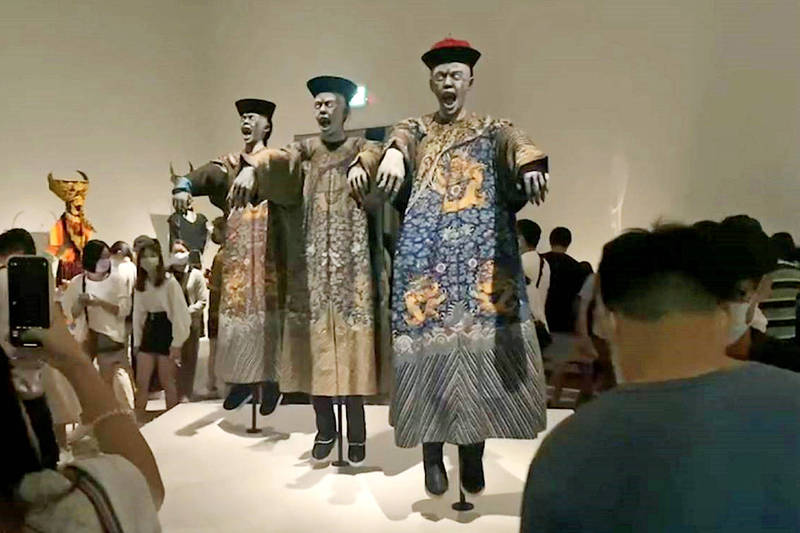 Visitors look at the three reanimated corpses in Qing Dynasty clothing known as jiangsi at the “Ghosts and Hells: The Underworld in Asian art” exhibition in Tainan on Saturday. Photo provided by the Tainan Art Museum

Opening-day ticket sales for a horror exhibition at the Tainan Art Museum were suspended twice on Saturday as the show attracted too many visitors.

Titled “Ghosts and Hells: The Underworld in Asian art,” the exhibition runs until Oct. 16.

It is the local version of a show that debuted at the Musee du quai Branly-Jacques Chirac in Paris. It was planned and curated by Julien Rousseau.

The Tainan museum said that within an hour of its doors opening, more than 1,000 people had entered the exhibition.

By noon, 3,000 physical and virtual tickets had been sold, while the museum had more than 4,000 visitors.

However, the museum is only able to accommodate 50 people in each of the show’s four exhibition rooms.

The overcrowding led to the museum suspending physical and online ticket sales at noon. Although tickets became available again at 3:30pm, sales were again halted within an hour, as crowds continued to pour into the museum to catch a glimpse of the ghastly exhibits.

Tickets sales were again brisk when they reopened at 6pm for the evening showing until 9pm.

The museum then announced that it would no longer allow people to enter after 7:15pm due to the high demand.

In total, 6,861 people visited on the first day of the exhibition.

The creature is considered to be a Chinese mix of a vampire and a zombie due to it having the attributes of both.