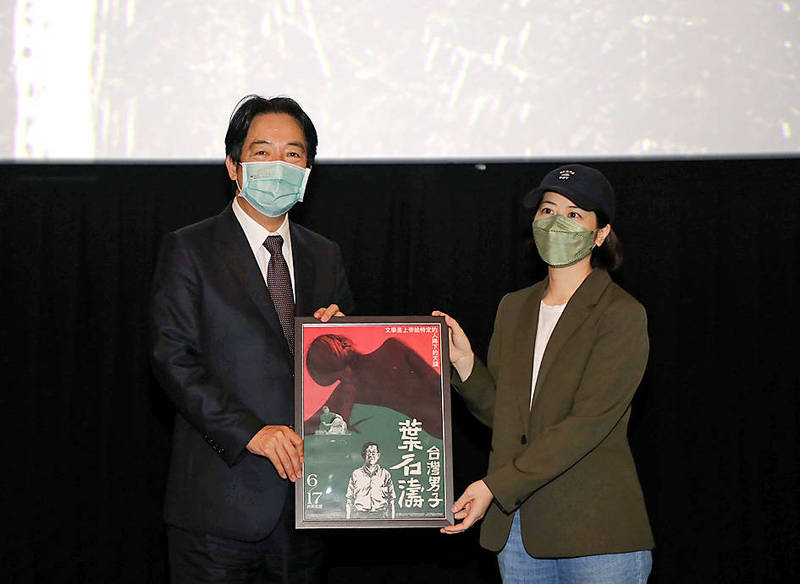 There are to be eight to 10 screenings of the documentary.

Executive producer Lin Ching-chieh （林靖傑） said that many of his friends warned him against being too close to politicians, but the documentary tells the story of a great literary academic and Taiwanese culture and values, which he said “surpass politics.”

Lin Ching-chieh said he disagreed with the idea that cultural workers should not become acquainted with politicians and that he welcomes political parties supporting Taiwanese indigenous culture.

He hopes that legislators who are willing to support local Taiwanese culture can inspire other politicians to pay more attention to cultural values.

Wang said that art and literature allow people to communicate with the place they grow up in, which in Yeh’s case is Tainan, where he had been brought up, educated, and arrested and persecuted by the Taiwan Garrison Command.

“Tainan is a good place for people to dream, work, fall in love, get married and enjoy a carefree life,” Yeh has said.

Chao said that when the movie Elena （愛琳娜）, which was directed by Lin Ching-chieh, was released in 2015, the two of them strove to have it stay in theaters longer, as the Hollywood blockbuster Jurassic World was also in theaters at the time.

Coincidentally, Yeh’s documentary was released when the new Jurassic World: Dominion arrived in theaters, he said.

He called on people to support the film by viewing in theaters, as it not only commemorates Yeh’s life, but the era he lived in.

Michelle Lin said that Yeh is not known to many Taiwanese as English playwright William Shakespeare or Japanese author Ryotaro Shiba.

Literature is the biggest driving force of Taiwan’s audiovisual and music industry, as good scripts come from good literature, she said, adding: “We can only tell others our own story by understanding it first.”