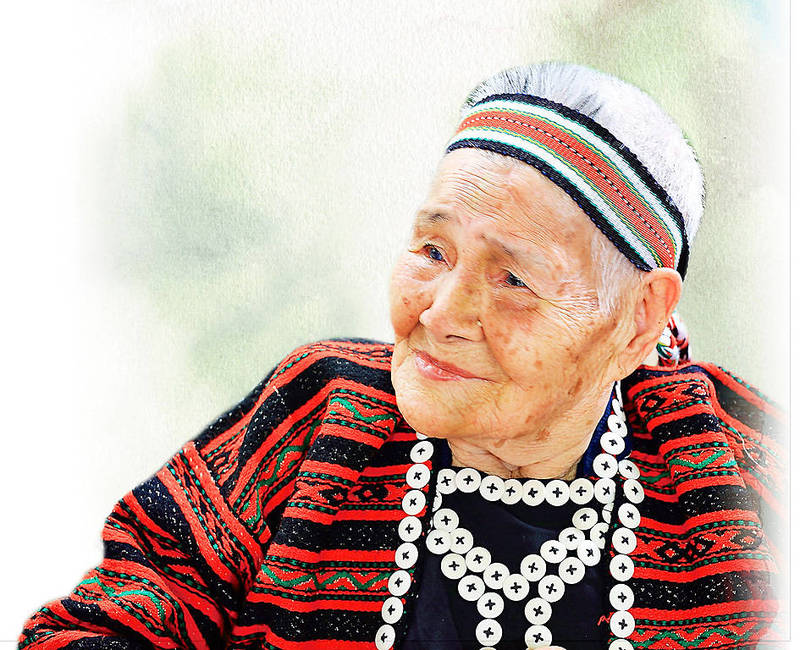 Ipay Wilang is pictured in an undated photograph. Photo provided by the Ministry of Culture

She died at her home in Hualien County, said Kimi Sibal, a Hualien-based historian who cowrote a 2016 book on Taiwan’s then six remaining indigenous facial tattoo preservers.

Ipay Wilang, a Sediq, had returned to Hualien earlier on Saturday after being discharged from a hospital in New Taipei City, said Lo Mei-ching （羅美菁）, head of the New Taipei City Indigenous Peoples Department.

She had been living with her eldest daughter in New Taipei City and was taken to Tucheng Hospital on Friday after she became unwell after catching a cold, Taiwan Indigenous TV reported.

Although her registered birthday was April 1, 1922, Lo said Ipay Wilang was actually 106 years old, because people at the time registered newborns some time after birth.

He thanked Kimi Sibal, who has been documenting the practices and taken photographs of more than 300 individuals across Taiwan who have the indigenous facial tattoos, and said his council would introduce indigenous culture to more people.

Minister of Culture Lee Yung-te （李永得）, whose ministry published the book cowritten by Kimi Sibal, said in a statement that only Atayal, Seediq, Truku and Saisiyat people maintained the tradition of facial tattoos, which is a historically important part of Taiwan’s cultural heritage.

Lee said his ministry would seek a presidential citation to honor the life of Ipay Wilang.

The Hualien County Government in 2009 listed the traditional facial tattoo practices of Atayal, Sediq and Truku as cultural heritage, and named Ipay Wilang as a preserver of the art form in 2016, Lo said.

People with facial tattoos are believed to be able to join their ancestors in the afterlife, he added.

The practice was banned during Japanese colonial rule between 1895 and 1945, and Ipay Wilang was forced to remove her facial tattoo when she was 15, leaving scars on her face, Kimi Sibal said.

Separately, the Council of Indigenous Peoples on Saturday said that Aljalju rulelavan, one of the few preservers of the Paiwan women’s hand tattoo tradition, has passed away at the age of 93.

Council Deputy Minister Calivat Gadu, a Paiwan, visited the township on Saturday to pay his respects and posthumously bestow on Aljalju the Third Class Award for Contribution to Indigenous Peoples, in recognition of her status as a preserver, the council said.

Aljalju was one of seven remaining culture conservationists in the township, who were certified last year by the Pingtung County Government in recognition of their preservation of veci’nua lima, the traditional hand tattoos of Paiwan women.

Traditionally, with the approval of the entire village, a woman may seek the village chief’s permission to obtain the tattoos, which reflect her social and familial status in the Paiwan culture, the council said.