《TAIPEI TIMES》 Cambodia naval base to be used by PRC military 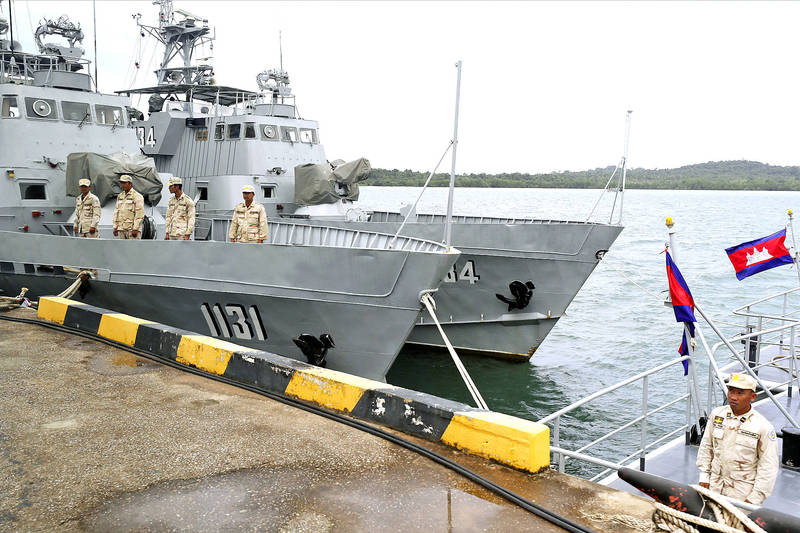 Cambodian Navy crew stand on a patrol boat at the Ream Naval Base in Sihanoukville, Cambodia, on July 26, 2019. Photo: AP

By Helen Davidson / The Guardian, TAIPEI

A Cambodian naval base being constructed with the assistance of China is to include a portion for the exclusive use of the Chinese military, the Washington Post reported yesterday.

The Chinese and Cambodian governments have previously denied reports that Cambodia would allow a Chinese military presence at the Ream Naval Base on the Gulf of Thailand.

Such a presence would mark a significant expansion in China’s military access in the Indo-Pacific region, where it currently only has one naval base, in the east African nation of Djibouti.

Citing unnamed Western and Chinese officials, the Post reported that the base would host the Chinese military in its northern section.

One Western official told the paper that expansion plans finalized in 2020 called for the Chinese military to have “exclusive use of the northern portion of the base, while their presence would remain concealed.”

A Beijing official confirmed the Chinese military would use a “portion” of the base, but denied it would have exclusive use.

Lowy Institute international security program director Sam Roggeveen said the new information, and particularly the apparent confirmation by a Beijing official, “strengthens the case that this is actually happening.”

“It’s fairly early days, so we don’t know what the capacity of the facility will be,” Roggeveen said. “Its practical value [to Beijing] is that it would allow China to deploy more readily its warships and coastguard vessels around the region, and to simply have a bit more presence, where once it would need to sail very long distances.”

Australian Prime Minister Anthony Albanese, who was visiting Indonesia yesterday, said he was concerned about the reports and called on the Chinese government to be open about its intentions.

“We are in regular contact with the Cambodian government and we have been consistently assured that no foreign military will be granted exclusive access at Ream,” Albanese told reporters in Makassar. “We’ve been aware of Beijing’s activity at Ream for some time. We encourage Beijing to be transparent about its intent, and to ensure that its activities support regional security and stability.”