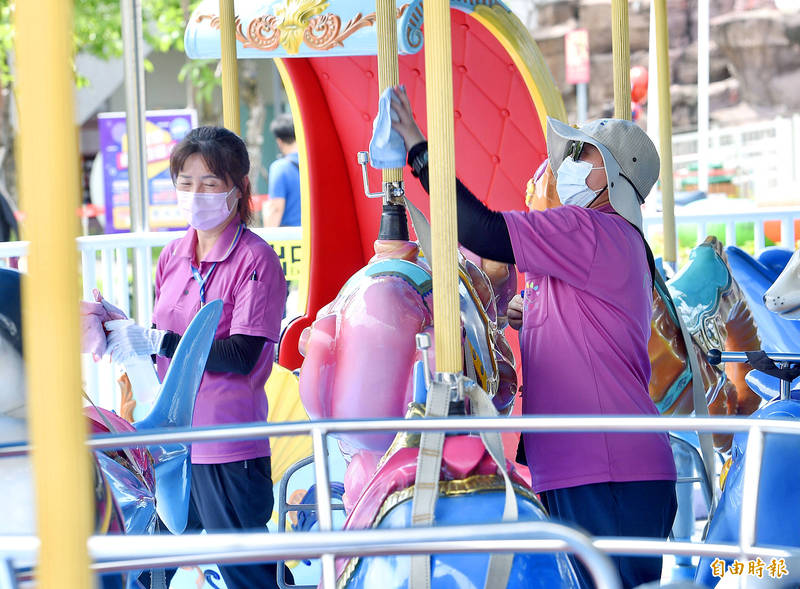 The strain on the emergency room capacity in Taipei and New Taipei City has effectively been alleviated after the introduction of a policy allowing positive rapid test results to be used to confirm COVID-19 cases, the Central Epidemic Command Center （CECC） said yesterday.

It added that the number of COVID-19 cases admitted to hospitals in the two cities has also been declining over the past three days.

However, the number of COVID-19 cases admitted to hospitals in cities and counties outside Taipei and New Taipei City has steadily increased, although the overall situation nationwide has plateaued, the CECC said.

Many emergency rooms in Taipei and New Taipei City were this month crowded with people waiting to undergo a polymerase chain reaction （PCR） test, but the situation eased after the new policy of allowing rapid test results confirmed by a doctor to be used for a COVID-19 diagnosis took effect on Thursday last week, said Minister of Health and Welfare Chen Shih-chung （陳時中）, who heads the center.

A record number of 40,000 emergency room visits was recorded on May 16, reflecting the public’s high demand for PCR tests at the time, said Centers for Disease Control Deputy Director-General Philip Lo （羅一鈞）, deputy head of the CECC’s medical response division.

The daily number of emergency room visits fell to about 25,000 after Thursday.

The number of COVID-19 cases admitted to hospitals in Taipei and New Taipei City peaked on Thursday at 3,168, but declined over the following three days, he said.

The previous daily record for COVID-19 deaths was 127 on Saturday, CECC data showed.

The 145 people reported yesterday to have died of COVID-19 complications were in their 30s to 90s, and included 136 who had chronic illnesses or other severe diseases, the CECC said.

Ninety-five were people aged 80 or older, while 70 had not been vaccinated, it said.

The youngest fatality reported yesterday was a man in his 30s who had chronic lung and kidney diseases, the CECC said, adding that he died of pneumonia and sepsis after contracting COVID-19.

The new severe cases included a one-year-old girl and a six-year-old boy, who both developed encephalitis, but have since improved and are no longer on ventilators, the CECC said.

Of the 1,788,230 domestic cases recorded in Taiwan so far this year, 1,454 have been classified as severe infections and 3,363 as moderate, accounting for 0.08 percent and 0.19 percent of the total respectively, CECC data showed.

All other cases were asymptomatic or had mild symptoms, the CECC said.