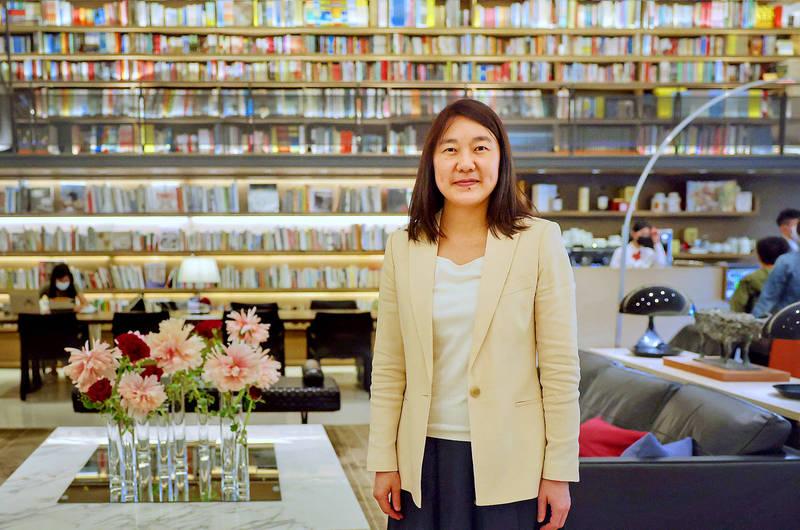 LANDLORD SILENT: Six of seven landlords support renewing the 24-hour branch lease, while Uni-President Group was said to be mulling the space for its own use

Eslite Spectrum Corp, which runs the Eslite bookstore chain in Taiwan, is waiting for approval from its landlord to extend the lease for its 24-hour store in Taipei’s upscale Xinyi District （信義）.

In its annual general meeting on Friday, Eslite chairwoman Mercy Wu （吳旻潔） told shareholders that the bookstore chain has been at a stalemate with conglomerate Uni-President Group, the largest of its seven landlords of the Xinyi store, in its talks to extend the location’s lease, which expires at the end of 2023.

The statement has raised fears that Taiwan’s only 24-hour bookstore could disappear if it cannot extend its lease.

The Xinyi store began 24-hour services in the spring of 2020, soon after the Eslite branch in the Dunnan （敦南） area closed in May that year. That branch opened in 1989 and began 24-hour operations in 1999.

Eslite has twice offered better terms in a bid to keep the location, with six of the seven landlords supporting the lease, and Uni-President Group being the only one to not respond, Wu said.

Eslite has agreed to a rent increase and to allow the landlords to share more of the sales revenue from the Xinyi branch, she said.

Wu said many shareholders are concerned about whether the lease might be extended, adding that Eslite has been sincere in its dealings with the landlords about continuing the Xinyi branch, which attracts 12 million visitors a year.

Sources said Uni-President Group is considering using the property to extend the Uni-Ustyle department store, which is adjacent to the Eslite Xinyi outlet.

The Uni-President Group said that it is still considering the terms of the new contract given that there is ample time before the current lease expires.

Wu said that she hopes to receive a reply soon so that Eslite can move forward in its operational planning, emphasizing that her company does not want the location to close.

The Sindian store is planned to be an 19,000 ping （62,810m2） mega outlet within a shopping center being developed by the automaker Yulon Group, Wu said.

That branch is to contain restaurants, coffee shops and cultural creative stores, and is currently seeking tenants, she said, adding that the branch is expected to generate NT$4 billion to NT$5 billion a year, with food and beverage shops accounting for up to 40 percent of revenue.

Eslite is also planning a to open a new store in Tainan in 2024, which at 6,500 ping would be the largest bookstore in the city.