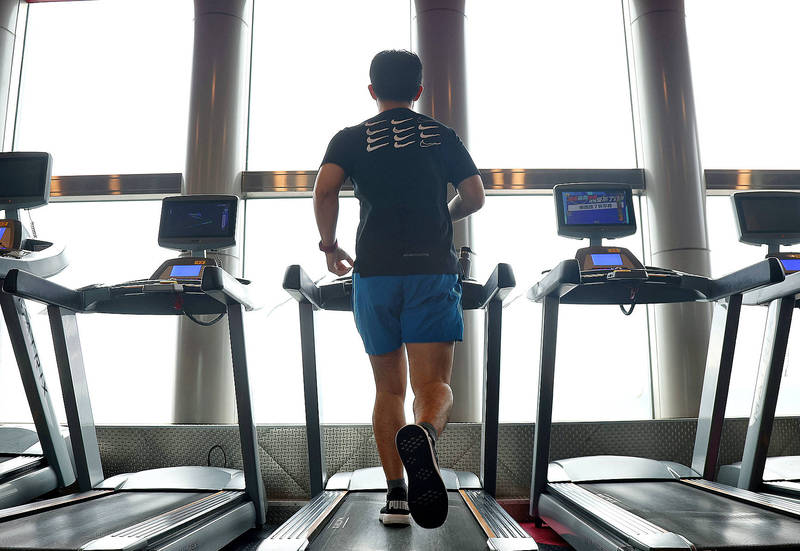 A man jogs on a treadmill at a gym in Taipei yesterday, as the Central Epidemic Command Center relaxed restrictions to allow people who have not had three doses of a COVID-19 vaccine to enter gyms. Photo: CNA

The COVID-19 pandemic has reached a plateau, with cases at a high but stable level, the Central Epidemic Command Center （CECC） said yesterday, as it announced single-day records of 94,808 domestic infections and 126 deaths.

Minister of Health and Welfare Chen Shih-chung （陳時中）, who heads the center, said that infections could stay near the current level for another two weeks before declining.

“Overall, daily cases have remained stable,” he told the CECC’s daily news conference. “They have plateaued in the past week or so. We hope this peak will soon pass.”

Hospital beds earmarked for COVID-19 patients were at 59 percent occupancy and the load on medical resources remained stable, Chen said, although he added that the government was closely watching the number of fatalities.

“We are on high alert and watching this number closely,” he said, urging hospitals to allocate enough intensive care units for COVID-19 patients.

Children aged up to 6 would receive five free rapid testing kits from Wednesday to June 30, the CECC said.

Allocation would be made based on the last digit of the recipient’s national identification card or Alien Resident Certificate, with odd numbers able to pick up test kits on Mondays, Wednesdays and Fridays, and even numbers on Tuesdays, Thursdays and Saturdays, it said.

Anyone can pick up test kits on a Sunday.

However, the kits cannot be used on children aged 2 or younger, the center said, adding that their allocations could be used by parents or caregivers.

Meanwhile, the Sports Administration yesterday said that people who have not had three doses of a COVID-19 vaccine could return to gyms, as long as they wear a mask at all times.

Asked whether the policy would extend to other venues with the restriction, Chen said that “it is best if not.”

The announcement followed another policy change on Thursday for incoming migrant workers, who starting from yesterday are no longer required to observe a seven-day self-health management protocol that follows mandatory quarantine.

Under the previous rules, incoming workers had to enter seven days of quarantine at a hotel, followed by seven days of self-health management at the same location.

The relaxation would free up capacity at quarantine hotels, which have been housing an increasing number of people who have tested positive for COVID-19, the Ministry of Labor said.

The new rule applies to migrant workers who are already in Taiwan and are in quarantine or observing self-health management, the ministry said.

Of the 126 people who died — who ranged in age from 10 to 100 — 113 had chronic illnesses or other severe diseases, while 52 were unvaccinated, CECC data showed.

The youngest was a 12-year-old boy with a hereditary neurological disease who developed a fever on Friday last week and the following day was confirmed as having been infected, it said.

The legislature yesterday approved a Cabinet request to extend the special COVID-19 relief scheme and its associated budget to June 30 next year.

The one-year extension of the Special Act for Prevention, Relief, and Revitalization Measures for Severe Pneumonia with Novel Pathogens （嚴重特殊傳染性肺炎防治及紓困振興特別條例） cleared the legislature unanimously.

The Cabinet made the request last month without seeking any additional funding above the already allocated NT$839.34 billion （US$28.6 billion）, as NT$130 billion from the previous allocation had yet to be spent.