《TAIPEI TIMES》 Ukrainians and Taiwanese rally in show of solidarity 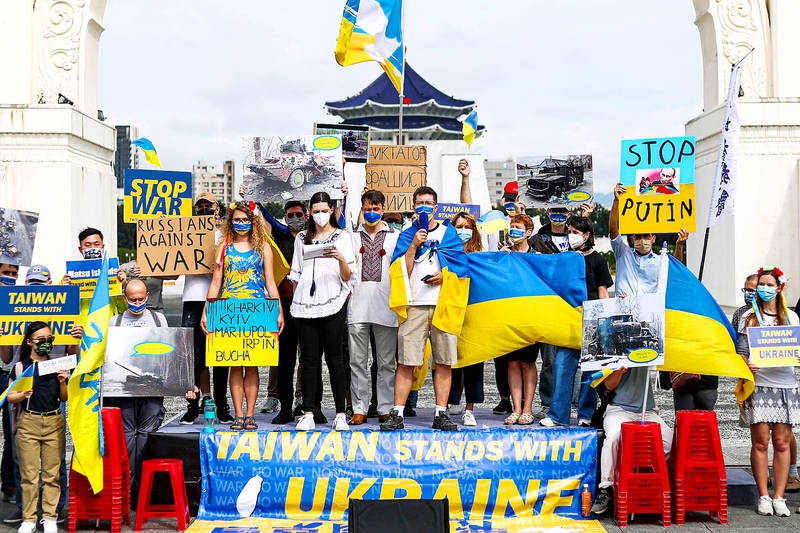 Protesters display placards in front of Liberty Square in Taipei during a “Toward Victory” rally organized by Ukainians and Taiwanese supporters. Photo: Ritchie B. Tongo, EPA-EFE

Ukrainians and their supporters yesterday held “Toward Victory” rallies in Hsinchu, Taichung and Taipei to show solidarity with Ukraine, as Russia’s invasion of the country enters its third month.

At a rally in front of Liberty Square in Taipei, dozens of people unfurled a 7m wide and 3m long handmade Ukrainian flag while singing the country’s national anthem.

Alex Khomenko, who is from Kharkiv, Ukraine, and one of the Taipei event’s organizers, told the crowd that resisting the Russian invasion was “the first and last thing we [Ukrainians] will think of when we wake up and go to bed every day.”

Khomenko, a member of Taiwan Stands With Ukraine （TSWU）, a volunteer organization founded in Taipei in response to the Russian invasion, said that the rally was held to coincide with Victory in Europe Day, which marks the formal acceptance of Germany’s surrender to the Allies on May 8, 1945.

“The day marks the day peace returns to Europe 77 years ago, when one country wanted to conquer others,” Khomenko said, adding that this year’s anniversary was overshadowed by Russia’s attempts to do the same.

As yesterday was also Mothers’ Day, Khomenko added that he, Ukrainians and their supporters in Taiwan were heartbroken for all Ukrainian mothers.

TSWU’s founder, a Taiwanese who identifies only as Jen, said that Ukrainian mothers and children are suffering from the war.

She called on the international community to take action over alleged incidents of sexual violence perpetrated by Russian troops in Ukraine.

Jen said that Russian soldiers are using rape as a weapon against Ukrainians, including children, and urged people to take a stronger stance against sexual violence in conflict zones.

The group’s Ukrainian flag was made by Migle Matekunaite, a Lithuanian living in Taiwan, TSWU said.

Matekunaite and her Polish husband have been participating in events across Taipei to show support for Ukraine, the group said.

Matekunaite said that it took her seven hours to make the flag.

Kyiv has been resisting the Russian invasion force since Feb. 24, the day Russian President Vladimir Putin ordered the commencement of a “special military operation” in pursuit of the “demilitarization and denazification” of the country.