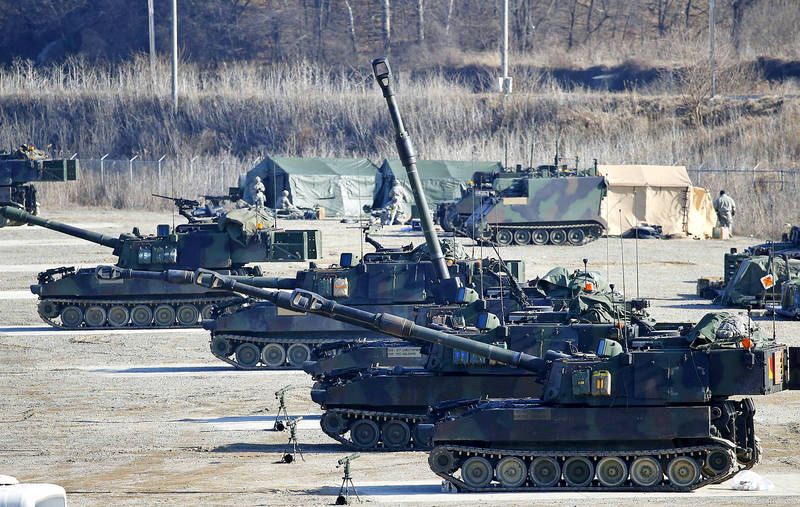 PRODUCTION SNARL: The Ministry of National Defense said it is considering a truck-based rocket launcher made by Lockheed Martin, which would still help it modernize

By Aaron Tu and Kayleigh Madjar / Staff reporter, with staff writer and Reuters

The Ministry of National Defense yesterday said it was considering alternative weapons options after the US informed it that the delivery of an artillery system would be delayed due to a “crowded” production line.

Washington last year approved the potential sale of 40 155mm M109A6 Paladin self-propelled howitzers to Taiwan in a deal valued at up to US$750 million.

Eight of the artillery systems were originally set for delivery next year, with 16 more expected in 2024 and 16 in 2025.

However, the ministry said that because of a “crowded” production line for the M109A6, the US said it would not happen until 2026 at the earliest.

It is considering other precision and long-range alternative weapons systems, including truck-based rocket launchers made by Lockheed Martin Corp called the High Mobility Artillery Rocket System, or HIMARS, the ministry added.

It did not say why the production line was snarled, but the US has been ramping up its military support and supply of equipment for Ukraine following Russia’s invasion.

Taiwan is undertaking a military modernization program to improve its capabilities to fend off a Chinese attack, including with precision weapons such as missiles.

While Washington has been suggesting that Taiwan improve its defenses by lengthening compulsory military service and establishing a territorial defense force, it virtually canceled the M109A6 deal, he said.

“It seems like a logical contradiction,” he said, adding that it might indicate a serious communication problem between the two sides.

The M109A6 would be invaluable to Taiwan’s forces, as it is not only highly mobile, but also able to obtain the enemy’s targeting information, calculate and order a strike automatically, all in less than a minute, Chieh said.

It would therefore go a long way toward automating the artillery command, shortening engagement time and improving accuracy, all of which are critical to national defense operations, he said.

Most artillery systems must wait for precise targeting information from a central command, which could take about five minutes from enemy launch, he said.

The delay would make it difficult to deal with the fast-paced and highly mobile forces China would send in a first strike, Chieh added.

While the military might have many traditional towed artillery units, they would not last long on the battlefield due to their lack of mobility and long engagement time, Chieh added.