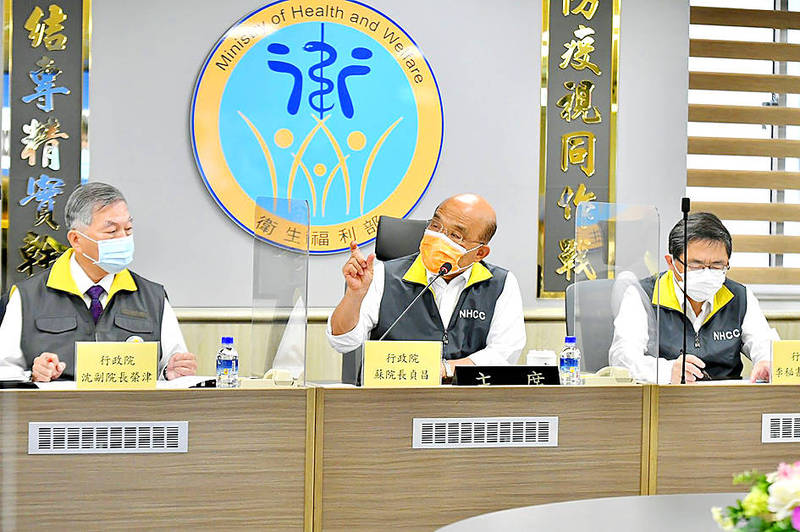 The nation’s eased COVID-19 restrictions have allowed people to live relatively normal lives during the latest local outbreak, and the government would continue reviewing its disease prevention strategies to help everyone return to normalcy, Premier Su Tseng-chang （蘇貞昌） said yesterday.

Su made the remark after holding a larger-than-normal disease prevention meeting at the Central Epidemic Command Center （CECC） yesterday.

After the new “3+4” home isolation policy was implemented last week, the number of people in isolation dropped to about 20,000, he said, adding that as 99.7 percent of local COVID-19 cases are mild or asymptomatic, the government has enough healthcare capacity to treat cases with moderate or severe complications.

The government would continue to review its disease prevention strategies to reduce the stress on frontline healthcare workers and administrative workers, and to take care of patients with moderate or severe complications, elderly people and high-risk groups, Su said.

As many countries have reopened their borders and are living with the virus, Taiwan is preparing to move to a new stage where people can resume their normal lives.

“We will not lock down the country and cities as cruelly as China,” Su said.

Taiwan’s methods are “gradual,” he said, adding: “We have a plan, and there is a rhythm to it.”

Minister of Health and Welfare Chen Shih-chung （陳時中）, who heads the center, yesterday said that 16,936 new local infections — an increase of about 12 percent from the day before — and 149 imported cases were confirmed yesterday.

Three deaths and 47 new cases with moderate or severe complications were also confirmed, he said.

Centers for Disease Control Deputy Director-General Philip Lo （羅一鈞）, deputy head of the CECC’s medical response division, said an unvaccinated man in his 90s died, as well as two men in their 60s, one of whom has received one dose of a COVID-19 vaccine, while the other had received two.

They all had underlying health conditions, Lo said.

Displaying a chart of the seven-day rolling average of testing positivity rates in the nation’s 22 cities and counties, Chen said the average rate nationwide was 9.63 percent, but New Taipei City had a rate of 21.98 percent and Taipei had a rate of 14.78 percent.

He said that more community testing stations would be set up in Taipei and New Taipei City, as the center is urging people not to overcrowd hospital emergency rooms, but rather undergo a polymerase chain reaction test at a testing station after testing positive using a rapid test kit.

Asked about a medical expert’s comment that the virus might peak between the middle and end of this month, Chen said the center believes the peak might be around that time, but it is also preparing to respond to other simulated scenarios of how the outbreak could play out.

He said that about 400,000 packs of rapid test kits, which contain five kits per pack, were distributed to pharmacies for people to purchase through the real-name rationing system on Saturday.