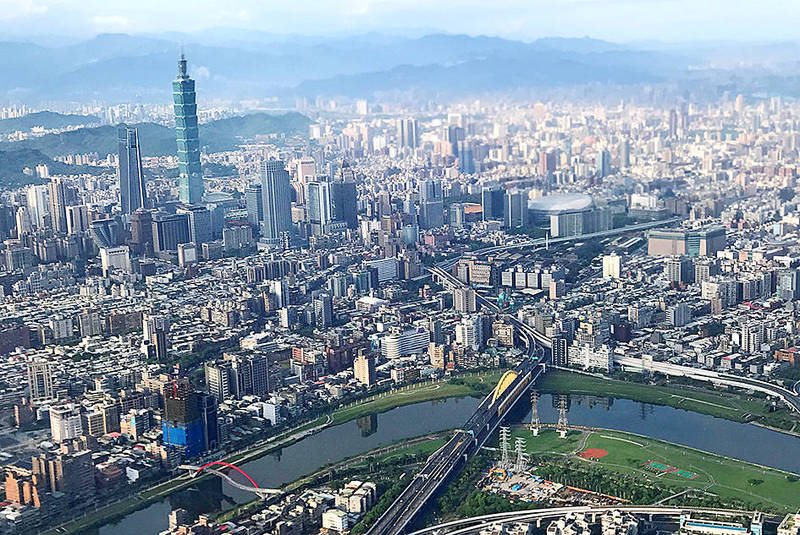 Nan Shan Plaza （L） and Taiwan`s landmark building Taipei 101 are pictured through the window of an airplane, in Taipei, Taiwan August 19, 2018. Photo: Reuters

POSITIVE FORECAST: In addition to semiconductor investments, the economy is expected to grow as the nation further relaxes COVID-19 restrictions, S&P said

The return is driven by expectations that the nation would continue to benefit from global digitalization and maintain healthy fiscal metrics over the next three to five years.

“We anchor our ratings on Taiwan on its strong external position and robust economic support,” the international ratings agency said, projecting GDP growth of 2.8 percent for this year and 2.6 percent for next year and 2024.

The nation’s top semiconductor foundries have been aggressively expanding their capacity to alleviate global supply shortages, with their efforts accounting for a 17.3 percent spike in private investment last year.

The investment surge is expected to continue this year in light of capital spending plans unveiled by major local firms, it said.

Taiwan’s monetary flexibility is strong, as the central bank has demonstrated sound management, which has kept inflation low and stable despite ample liquidity in the economy, it said.

The relatively flexible exchange rate for the local currency also helps cushion economic and financial shocks, the agency said, adding that Taiwan’s inflation has been among the lowest in Asia.

Low funding costs and ample liquidity have kept the government’s interest burden at less than 5 percent of general government revenue in the past few years, it said.

Despite rising numbers of COVID-19 cases, Taiwan appears to be moving toward opening up, supported by high vaccination rates, acceptable burdens on the healthcare system and mostly mild symptoms among recent cases.

In the absence of lockdowns, private consumption could recover soon, and if the government lifts border controls, tourism flows could provide a further boost to the economy, it said.

In the long run, stable international trade and cross-strait relations would remain the linchpin for Taiwan’s economic performance, it said.

Continued access to customers and suppliers from the US and China are crucial for Taiwan’s export-driven manufacturers to remain competitive and productive, it added.

However, an aging population and low labor productivity growth could lead to increased social and welfare spending, a fast-growing item on the government’s budget.