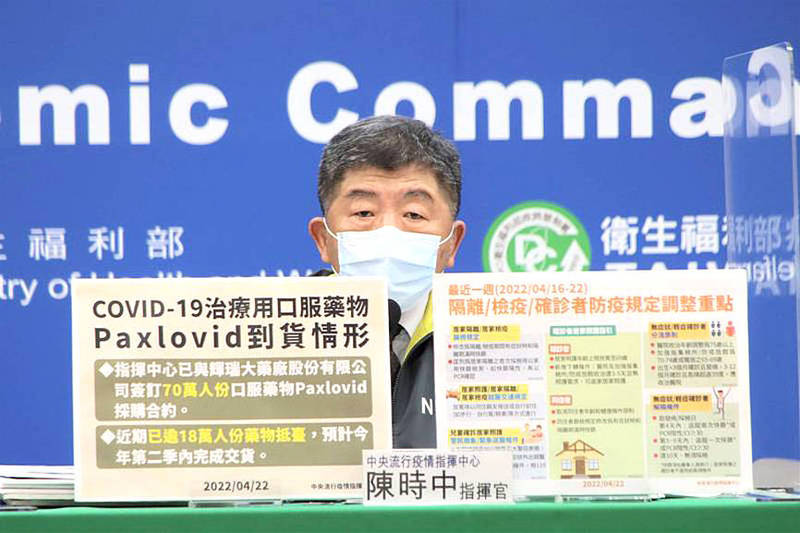 CRITICAL INDUSTRIES: Effective today, essential workers who are isolating at home can be recalled to work if they take rapid tests every two days, Chen Shih-chung said

By Yang Yuan-ting and Jonathan Chin / Staff reporter, with staff writer and CNA

Faced with a spike in COVID-19 cases, the new policy is part of government measures to preserve the nation’s response capability, Minister of Health and Welfare Chen Shih-chung （陳時中）, who heads the center, told a news briefing.

Current pandemic regulations stipulate that people who had close contact with a person who has tested positive for COVID-19 must isolate for 10 days.

Starting today, essential workers who are isolating at home can be recalled to work if they take rapid tests every two days, Chen said.

Asked what professions and entities fall under this category, Chen said that the concerned regulatory authorities would make the call.

Citing an example, he said people working in the energy or oil industry, as well as members of the military, are a priority concern.

The respective regulatory authorities will decide before a private or public entity can recall workers, and only if the pandemic reserve workforce was activated and is deemed to be operationally insufficient, he said.

Rapid tests for the recalled worker are to be performed every two days over a 10-day period after exposure to a confirmed COVID-19 case, he said.

Addressing concerns over vaccines, Chen said the government is on the verge of signing an agreement for 1.5 million Pfizer-BioNTech vaccine doses, including vaccines for children, adding that they could be delivered as early as next month.

As for rapid test kits, Chen said that 7.8 million Abbot test kits are to arrive on Saturday next week, 21 million Roche test kits on May 2 and tens of millions more after that.

An official, speaking on condition of anonymity, said that 1.235 million domestically produced test kits should be available by Sunday.

Asked at the news briefing about former health minister Yaung Chih-liang’s （楊志良） statement that he had asked the government to allow the importation of 10 million Chinese-made rapid test kits, Chen said that the ministry has no record of such a request being made.

Rapid test kits — like other drugs and medical devices — must obtain authorization from the Food and Drug Administration before an import license can be issued, he said.

The CECC added that 11 patients, aged 60 to 100, had developed moderate infections, while one patient in their 90s developed a severe infection.

A health worker performs a nasal swab test on a woman on a scooter at a rapid COVID-19 testing station in Kaohsiung yesterday. Photo: CNA

A sign saying “rapid COVID-19 test kits sold out” is pictured on a window of a Watson’s store in Taipei’s Wanhua District on Thursday. Photo: CNA