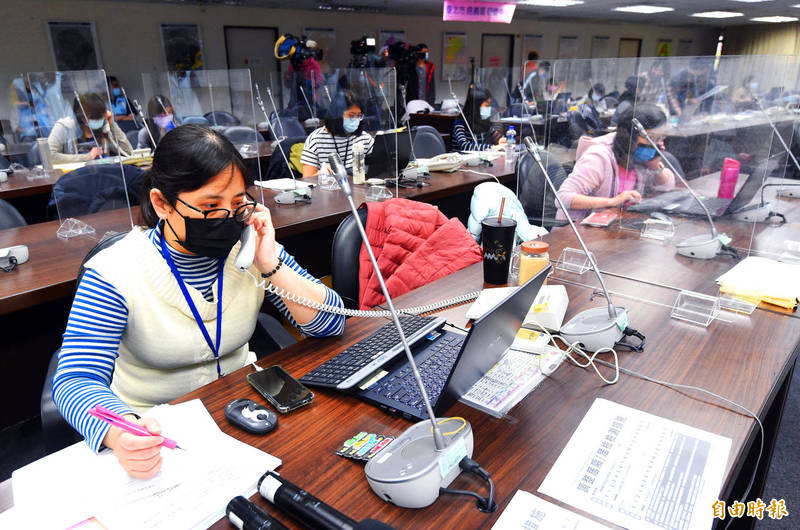 from people with mild symptoms or those quarantining at home at the Xinyi District Office in Taipei yesterday. Photo: Liao Chen-huei, Taipei Times

BOOSTING IMMUNITY: Adolescents aged 12 to 17 are encouraged to get a booster shot, while high-risk groups are recommended to receive a fourth jab

With local COVID-19 cases surging to 2,386 yesterday, the Ministry of Health and Welfare announced that it is recommending two doses of the Moderna COVID-19 vaccine for children aged 6 to 11, and a fourth dose for high-risk groups.

The committee also agreed to recommend a booster shot for adolescents aged 12 to 17.

The fourth dose is suggested to be at least five months after the booster dose.

With local case counts surging by about 40 percent yesterday, the local COVID-19 outbreak is expected to expand to a larger scale, the Central Epidemic Command Center （CECC） said.

“We expect the local COVID-19 outbreak to expand on a relatively larger scale, but hopefully not at a very rapid pace,” Minister of Health and Welfare Chen Shih-chung （陳時中） said, as local case counts have exceeded 1,000 for six consecutive days.

“We still urge people to be cautious, properly wear a mask and practice social distancing when going out,” said Chen, who heads the CECC.

Asked if the daily case count could rise to 100,000, Chen said that, hopefully, the daily figures would not grow that high, but the center is looking at trends in nearby countries as it prepares in advance, including securing sufficient COVID-19 drugs.

However, he said it is possible that the daily case count could exceed 10,000 by the end of the month.

The severe case is a woman in her 70s, who has hypertension, cirrhosis and arrhythmia, and has received only one dose of a COVID-19 vaccine, Chen said, adding that she is on a ventilator and is being treated with remdesivir in an intensive care unit.

The center also reported 95 imported cases yesterday, including 34 from Vietnam.

Asked to comment on New Taipei City Mayor Hou You-yi’s （侯友宜） call for simplified procedures to identify close contacts and put them under home isolation, given the rapid increase in cases in the city, Chen said the center has already approved “more focused” contact tracing, including easing the criteria of close contacts from four days before the onset of symptoms or testing positive to only two days.

He also urged confirmed cases to stay calm and try to remember all their close contacts in the past couple of days, and also provide their contact information to the contact tracing personnel when asked.

Local governments have full authority to conduct contact tracing and issue home isolation notifications, and the notification has been digitized to save time, Chen said, adding that as it might take time for local health departments to send an official isolation notification, people should start self-isolating the moment they are informed by telephone.