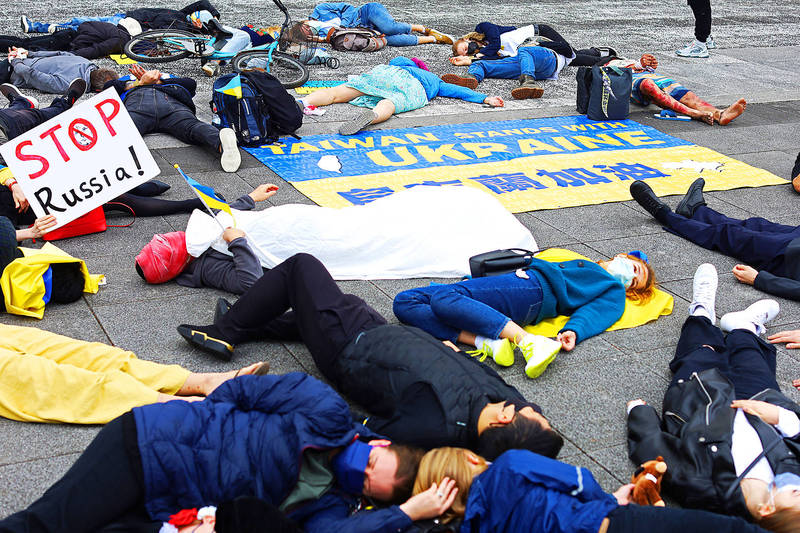 A group of Ukrainian and Taiwanese demonstrators yesterday staged a “die-in” at Taipei’s Liberty Square to protest reported atrocities committed by Russian troops in the Ukrainian town of Bucha.

Dozens of demonstrators lay on the ground while sounds of explosions and gunfire were played from speakers to simulate Russian attacks on Ukrainian civilians.

The mayor of Bucha has said that more than 400 bodies have been found in the town since Tuesday last week, following the withdrawal of Russian forces after a month of occupation.

The Kremlin has denied accusations that it targeted civilians and said the images of dead bodies lining the town’s streets were fake.

A protester yesterday said Bucha was only one of many towns that have been devastated by the Russian military.

“The people living there had nothing to do with the military, and there are no military installations in Bucha, but civilians were killed by the Russians, for no reason,” said Daria Zheng, who is from Vinnitsya, Ukraine, and has lived in Taiwan for more than five years.

Another Ukrainian, who asked to be identified only as Vadym, said he has lost his father and grandfather in the war, while his 18-year-old brother is fighting the Russians.

“We will never give up,” Vadym said. “We are a free people, and no one can take that away from us. We will win because we are fighting for our future.”

Alex Khomenko, one of the Ukrainian organizers of the protest, urged the Taiwanese to continue to support Ukraine by donating money to help Ukrainian women and children as long as the war continues.

Separately yesterday, the Ministry of Foreign Affairs and the Polish Office in Taipei held a benefit concert for Ukraine at the National Concert Hall in Taipei.

The Polish office proposed holding the concert, which was organized by the Taipei Philharmonic Foundation for Culture and Education, under the auspices of the foreign ministry and the Ministry of Culture.

Polish Office in Taipei Director Cyryl Kozaczewski said that since Russia invaded Ukraine on Feb. 24, more than 4.5 million Ukrainians have fled to European countries, and the majority of them — more than 3 million — have found temporary shelter in Poland.

Kozaczewski said he deeply appreciated the donations and humanitarian aid that Taiwanese have provided to Poland and other countries hosting Ukrainian refugees.

The proceeds from the concert would go toward the foreign ministry’s efforts to help Ukrainian refugees, the Polish office said.