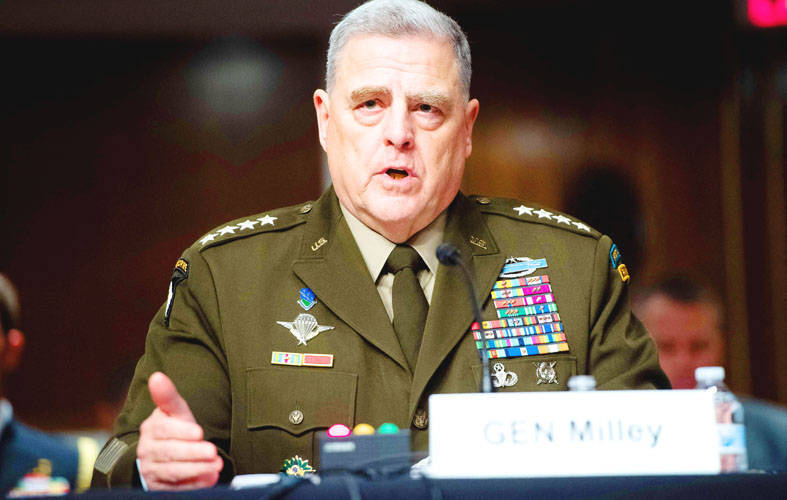 Making Taiwan a “very difficult objective to take” is the nation’s best defense strategy, and the US can help as it has with Ukraine against Russia, US Joint Chiefs of Staff Chairman General Mark Milley said on Thursday.

“Taiwan is a defensible island. We just need to help the Taiwanese to defend it a little bit better,” Milley told a US Senate Armed Services Committee budget hearing.

He was responding to a question from US Senator Rick Scott on whether proposed military spending for next year was enough to deter a Chinese military attack.

Milley said that “the best defense of Taiwan is done by the Taiwanese” with US support, and that the key to deterrence was to “make sure that the Chinese know that if they were to attack Taiwan, it’s a very, very difficult objective to take.”

China has observed several lessons in Russia’s invasion of Ukraine, including the challenges of conducting an amphibious or air assault on Taiwan with its millions of people, Milley said.

In his written testimony, Milley said that China is continuing to develop significant nuclear, space, cyber, land, air and maritime military capabilities, and that “they are working every day to close the technology gap with the US and its allies.”

“In short, they remain intent on fundamentally revising the global international order in their favor by mid-century, they intend to be a military peer of the US by 2035 and they intend to develop the military capabilities to seize Taiwan by 2027,” Milley said.

Also responding to a question asked by Scott, US Secretary of Defense Lloyd Austin defended the Pentagon’s spending proposal, saying its focus on investments in technology, cyberspace and undersea capabilities would help with deterring China and confronting the existing challenge of Russia.

He said the US considered China to be “a now and forever problem in terms of a challenge” that would evolve.