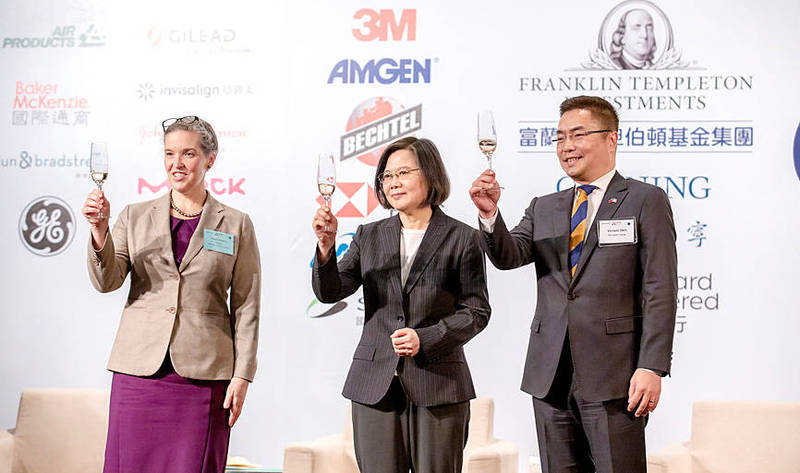 NOT ALONE: Beijing’s attempts to ‘choke Taiwan’s international space, pressure its friends and interfere’ in its government threaten all democracies, the AIT director said

Enhancing Taiwan’s role as “a regional security partner” and promoting global supply chain resilience are among the top priorities of the American Institute in Taiwan （AIT） in the second year of US President Joe Biden’s presidency, AIT Director Sandra Oudkirk said on Wednesday evening.

Speaking at the annual Hsieh Nien Fan （謝年飯） banquet hosted by the American Chamber of Commerce in Taiwan, Oudkirk said that the US-China relationship is facing challenges in areas such as trade and human rights, while the US is also concerned about Beijing’s ties with Moscow, especially after Russia’s invasion of Ukraine.

In the Indo-Pacific region, China’s aggressive behavior is especially obvious in Taiwan, where Beijing continues to exert military, diplomatic and economic pressure, she said.

China continues to “choke Taiwan’s international space, pressure its friends and interfere in Taiwan’s democratic system,” which poses a threat to all democratic countries, she said.

China’s provocative military activities near Taiwan are disrupting stability and peace in the region, she added.

To counter China’s actions, the US would continue “standing with allies and partners to advance our shared prosperity, security and values in the region,” which is at the core of Biden’s foreign policy, Oudkirk said before discussing the AIT’s objectives.

First, the US would continue to assist Taiwan in enhancing its defensive capabilities to improve “Taiwan’s role as a regional security partner,” as stability across the Taiwan Strait is key to regional peace and in the US’ interests, she said.

The US is “deeply concerned by ongoing PRC [People’s Republic of China] efforts to undermine that stability,” she added.

Second, the US would work with Taiwan to bolster global supply chain resilience through a series of initiatives, as Taiwan is at the center of the semiconductor supply chain, and a pioneer in 5G technology and artificial intelligence, Oudkirk said.

Taiwan would play a crucial role in the recovery of supply chains affected by the COVID-19 pandemic, she added.

The US is to use the Technology Trade and Investment Collaboration framework to encourage investment in semiconductors, electric vehicles, cybersecurity, renewable energy and energy storage from both sides, she said.

The AIT this summer is to form trade delegations to visit the US to discuss the framework, which would help “build scalable eco-systems and enhance collaboration between and among companies, research institutions and innovation centers,” she added.

Third, the US would keep “supporting efforts to preserve and expand Taiwan’s international space,” offering more opportunities for Taiwan to share its expertise at multilateral forums and interact with international partners, she said.

The institute would also strive to deepen “economic and people-to-people ties” between the US and Taiwan in high-tech fields and beyond, she said.

Taiwan was the sixth-largest consumer of US agricultural products and the US’ eighth-largest trade partner in goods last year, with per capita trade only behind Canada and Mexico, she said.

Last year, the US and Taiwan relaunched Trade and Investment Framework Agreement talks and held the second Economic Prosperity Partnership Dialogue, which would promote economic cooperation between the nations and help “build a coalition to counter the PRC’s unfair economic and investment policies,” she added.