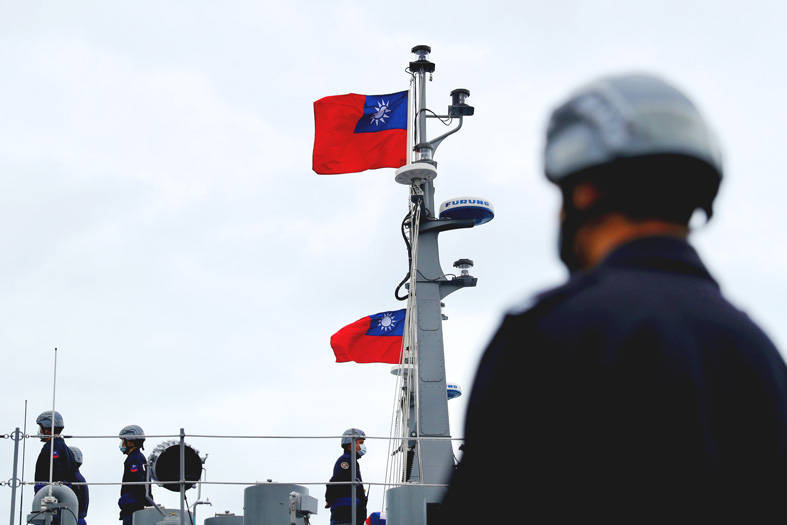 “The specter of a powerful country gobbling up a smaller neighbor has sharpened minds,” reads the subhead of the article titled “Ukraine has changed how Taiwanese see themselves.”

Framing the piece around 75th anniversary commemorations of the 228 Massacre, the London-based magazine said that Russia’s invasion of Ukraine is reminding Taiwanese of the threat they faced not long ago under decades of martial law.

As the Chinese Nationalist Party （KMT） has long since formally apologized for the massacre and subsequent White Terror, the threat has shifted to “its communist vanquishers on the mainland,” it said.

“More than the people of any other country in Asia, [Taiwanese] are stirred by the plight of Ukraine, as its people bravely resist a gargantuan invader,” the magazine wrote, referencing buildings and bridges lit up in Ukrainian blue and yellow around Taiwan.

The slogan “Ukraine today, Taiwan tomorrow” is making the rounds online as Taiwanese note the “glaring” parallels between the intentions of Russian President Vladimir Putin and Chinese President Xi Jinping （習近平）, it said.

Videos of defiant Ukrainians have changed how Taiwanese view themselves, the magazine said, citing a 25-year-old protester in front of the Russian representative office who said that if Ukrainians can do it, “then why can’t Taiwanese, too?”

Taiwan Thinktank security specialist Lai I-chung （賴怡忠） told the magazine that there is a new direction in the national conversation, as scenes from Ukraine boost morale.

Lai also reported an increase in calls to his organization and others inquiring about military training courses to help them prepare for a possible invasion.

The report cited KMT deputy director of international affairs Eric Huang （黃裕鈞） as saying that Ukraine “has made everyone think more about self-reliance.”

“That will be music to American ears,” the magazine said, referencing long-standing complaints in Washington of apparent Taiwanese disinterest in national defense as the US displays its commitment to Taiwan’s security.

The more “substantive concern” is apathy in reforming and strengthening the nation’s defense capabilities, it added.