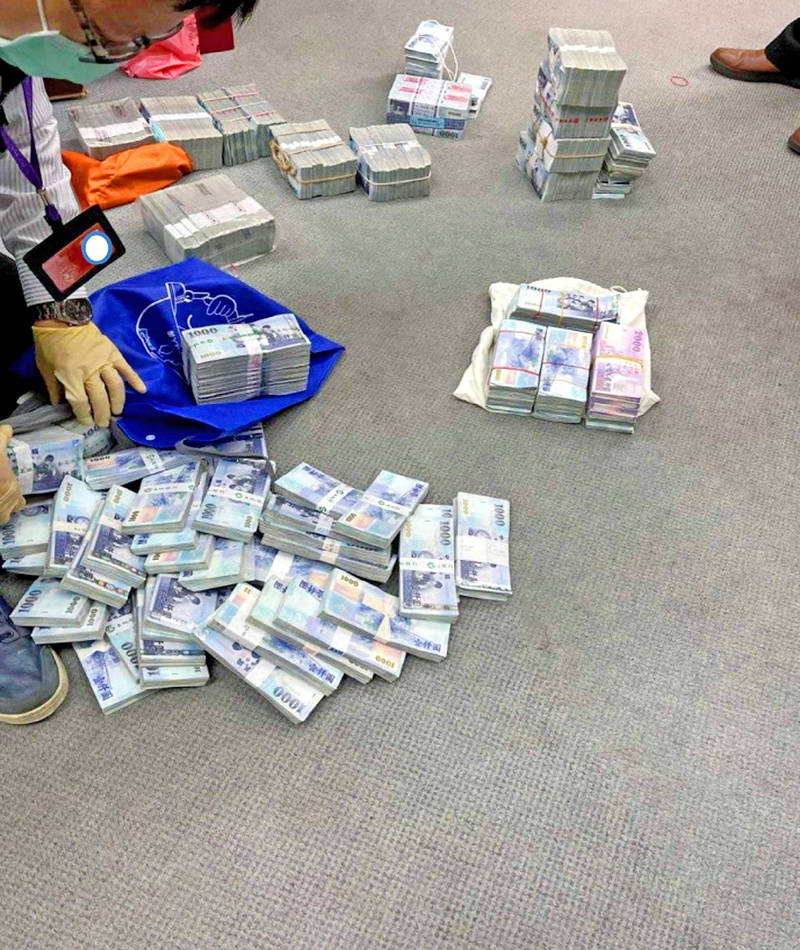 Bank notes seized during a raid are pictured in Kaohsiung yesterday. Photo courtesy of the Kaohsiung District Prosecutors’ Office via CNA

TIP-OFF: The Ministry of Justice’s Agency Against Corruption raided the office of Henry Hsu, CEO of CPC’s Refining Business Division, after he allegedly received bribery money

A top executive at state-run petroleum enterprise CPC Corp, Taiwan （CPC, 台灣中油） was yesterday arrested on suspicion of taking bribes after NT$27 million （US$971,013） in cash was found at his Kaohsiung office in a raid the previous day.

The Ministry of Economic Affairs （MOEA） said it has formed a task force to examine the case.

The Kaohsiung District Prosecutors’ Office said that after questioning, Henry Hsu （徐漢）, 61, who is chief executive officer of CPC’s Refining Business Division, was detained, along with a contractor surnamed Liu （劉）, to prevent them from colluding or tampering with evidence.

A tip-off led the Ministry of Justice’s Agency Against Corruption to raid Hsu’s office on Wednesday, after Liu allegedly delivered the NT$27 million a day earlier.

As Hsu could not provide a legitimate source for the cash, investigators said that it was believed to be from bribes, leading prosecutors to request that Hsu and Liu be detained.

Two other contractors, surnamed Lee （李） and Huang （黃） --- who were later released on bail of NT$600,000 and NT$300,000 respectively --- are suspected of conducting under-the-table deals, investigators said.

Hsu’s division is responsible for CPC’s two main facilities, the oil refinery in Kaohsiung’s Siaogang District （小港） and the refinery in Taoyuan’s Gueishan District （龜山）, which together process 600,000 barrels of crude oil per day, a report released last year by CPC said.

Yesterday, Minister of Economic Affairs Wang Mei-hua （王美花） said that she had requested CPC to fully cooperate with the corruption probe, as well as mandating that a task force conduct an administrative investigation because the case involves a state-run enterprise.