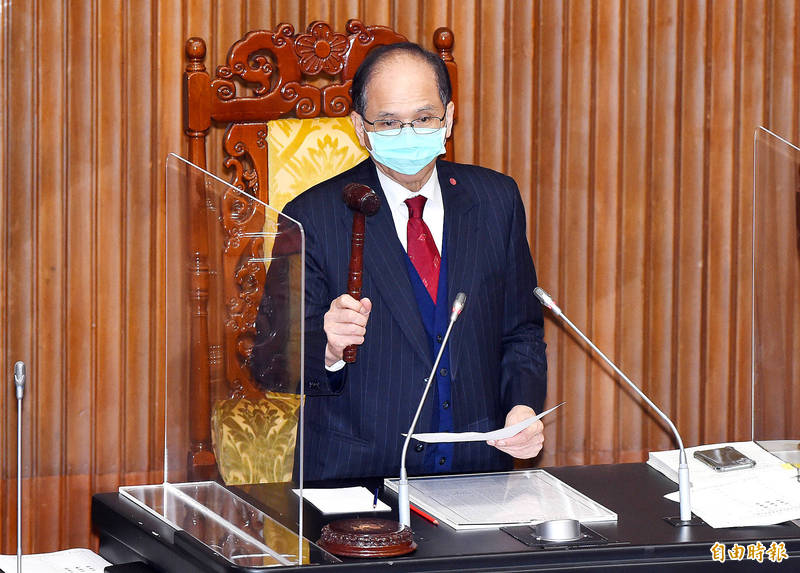 Legislative Speaker You Si-kun raises his gavel after amendments to the Criminal Code and the Road Traffic Management and Penalty Act were passed in the Legislative Yuan in Taipei yesterday. Photo: Liao Chen-huei, Taipei Times

Drunk drivers and their passengers are to face stricter fines and penalties after the Legislative Yuan yesterday passed proposed amendments to the Criminal Code and the Road Traffic Management and Penalty Act （道路交通管理處罰條例）.

Lawmakers across party lines agreed to mete out heavier penalties to drunk drivers after a series of deaths caused by accidents involving driving under the influence since the end of last year.

The amendment to Article 185-3 of the Criminal Code stipulates that drunk drivers who do not cause accidents or casualties can be sentenced to up to three years in prison, and fined up to NT$300,000 （US$10,832）.

The amendment does not change sentences for drunk drivers leading to deaths or injuries, but it allows judges to impose an additional fine of up to NT$1 million if the offense causes serious physical injuries, or NT$2 million for causing death.

The current penalty for deaths caused by drunk driving is a jail sentence of three to 10 years, while injuries could incur a sentence of one to seven years.

The amendment to the road traffic management act defines a repeat drunk-driving offender as one who commits the offense more than once within 10 years, up from five years.

Armed forces personnel who drive under the influence without causing deaths or injuries can be sentenced to up to three years in prison and fined up to NT$400,000, following an amendment to the Article 54 of the Criminal Code of Armed Forces.

The amendment also stipulates that military personnel who are repeat drunk-driving offenders are to be sentenced to five years to life in prison, and fined up to NT$3.2 million if the offense causes death.

The amendment to the road traffic management act also allows the Directorate-General of Highways to make public a repeat drunk driver’s name and photograph, along with the offense committed.

However, the fine is to be waived for bus passengers, people aged 70 or older, and mentally challenged individuals, the amendment says.

Fines for intoxicated motorists or motorcyclists would be higher if they have been clearly informed by vehicle renters that they must not drive cars or ride motorcycles under the influence of alcohol or addictive drugs, it says.

The amendment also raises the fine for drunk drivers who do not have alcohol interlocks on their vehicles after regaining their driver’s license to NT$60,000 to NT$120,000, from the current NT$6,000 to NT$12,000.

After retaking a driver’s license test and passing it, offenders would have their driver’s license returned after registering an interlock-equipped vehicle at a motor vehicle office, it says.