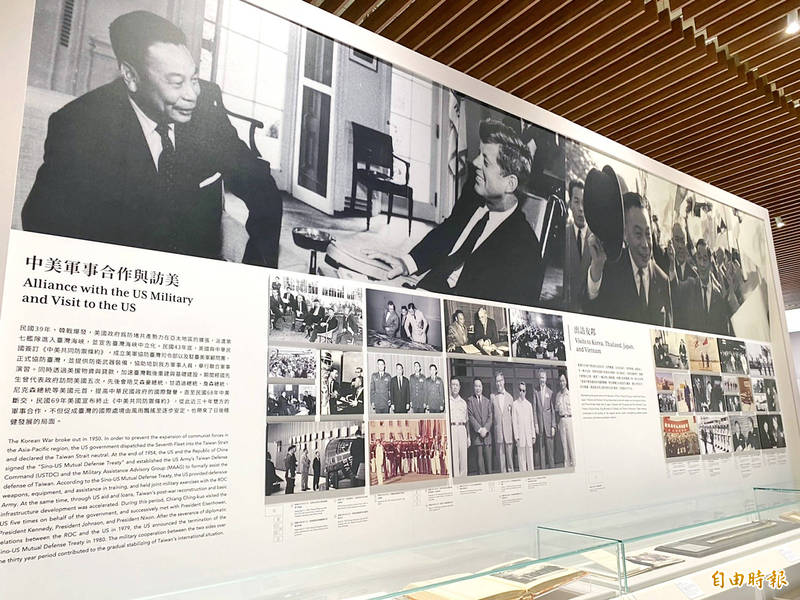 A display board at the Ching-kuo Chi-hai Cultural Park in Taipei on Wednesday describes former president Chiang Ching-kuo’s alliance with the US military and visit to the US. Photo: Yang Hsin-hui, Taipei Times

A database of 55,000 documents related to former president Chiang Ching-kuo （蔣經國） was placed online on Wednesday, providing the public with a more comprehensive picture of the nation’s history and development, Academia Historica said.

The database also provides information from an academic research perspective about a period that saw the loosening of the authoritarian regime under Chiang, Academia Historica said.

In July 1987, Chiang Ching-kuo of the Chinese Nationalist Party （KMT） declared an end to martial law, which had lasted 38 years. That same year, he also eased cross-strait restrictions by allowing family visits to China.

Chen Yi-shen （陳儀深）, president of Academia Historica, which manages the written works of presidents and vice presidents, said that the records include Chiang Ching-kuo’s proclamations, speeches, diaries and political reports.

The database includes comprehensive records on Chiang Ching-kuo, including his handwritten notes and biographies on him, Chen said.

The public could follow Chiang Ching-kuo on his frequent inspections of outlying islands and related activities, providing further information about national development, it said.

The database has been completed because sufficient information was collected on Chiang Ching-kuo and the period saw the gradual loosening of authoritarian controls, Chen said.

A database would next be created on former president Lee Teng-hui （李登輝）, also of the KMT, who was in office from 1988 to 2000 and transformed Taiwan into a full democracy, he said.

Lee’s efforts have been called the “quiet revolution” that laid the foundation for a peaceful transition from a dictatorship to democracy. Dubbed “Mr Democracy,” Lee died on July 30, 2020, at the age of 97.

Although Lee did not leave many diaries, the Lee Teng-hui Foundation has many historical records, so Academia Historica aims to complete the database in one to two years, Chen said.

Taiwan hopes to build a database for each president or a library that covers the writings of all of Taiwan’s presidents in a bid to advance academic research, Chen added.

Ching-kuo Chi-hai Cultural Park （經國七海文化園區） in Taipei’s Dazhi （大直） area — which features Chiang Ching-kuo’s collections, diaries and paintings, among other items — is to be opened to the public from tomorrow, the Chiang Chiang-kuo Foundation for International Scholarly Exchange said.

The park includes Chiang Ching-kuo’s former home — known as the Seven Seas Residence （七海寓所） — a library and a tourist center.