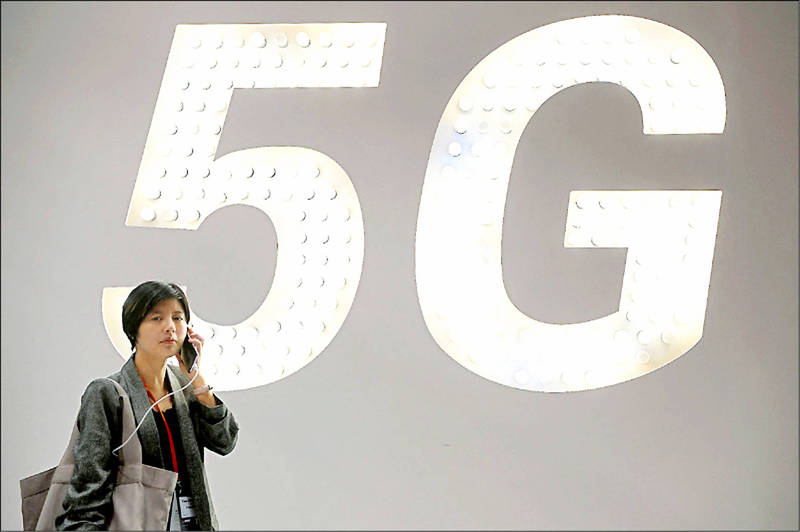 A visitor speaks on the phone next to a 5G sign at the Intel stand at the Mobile World Congress in Barcelona, Spain, on Feb. 25, 2019. Photo: AFP

Taiwan’s 5G service would not interfere with civil aviation, as there is a broad guard frequency band between the two systems, the National Communications Commission （NCC） said yesterday.

The 5G system’s possible risks to flight safety came under scrutiny after the US Federal Aviation Administration （FAA） last week warned that 5G services in the C-band spectrum might interfere with radio altimeters on certain types of aircraft, which could prevent a plane from stopping on the runway after landing.

Pilots use radio altimeters when landing under low-visibility.

Major US carriers last week also said that 5G service plans offered by AT&T and Verizon Communications could disrupt air travel and cost air passengers in the country US$1.6 billion annually in delays.

China Airlines and EVA Airways yesterday adjusted the departure times of some flights to and from the US in light of the FAA order.

EVA Airways yesterday afternoon said that it would resume normal flights to the US after the FAA temporarily eliminated the flight safety threat posed by 5G systems.

Air carriers worldwide use the frequency band from 4.2GHz to 4.4 GHz, Niou said, adding that interference could occur if there is an insufficient guard band between the two systems.

“There is 530 megahertz of bandwidth between Taiwan’s 5G systems and the frequency band used by civil aviation systems, so such interference will not occur,” Niou said.