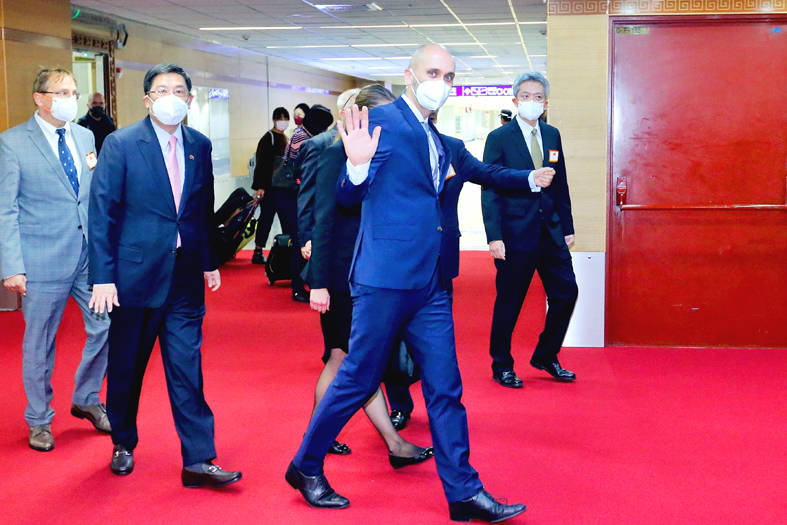 HIGH-LEVEL VISIT: The official leading the group is to cohost the first inter-ministerial economics meeting between Taiwan and Slovakia, MOFA said

A 43-member Slovak delegation led by the country’s deputy economics minister arrived in Taiwan yesterday evening. It is the highest-level visit by the EU member state since it opened a representative office in Taiwan in 2003.

The delegation, led by Slovakian Second State Secretary of the Ministry of Economy Karol Galek, arrived at Taiwan Taoyuan International Airport at 5:38pm.

Deputy Minister of Foreign Affairs Tien Chung-kwang （田中光） greeted the delegation as they disembarked from their aircraft, which bore the Slovakian national emblem and the title “Slovak Republic” on its side.

During the visit, Galek is to cohost the first Taiwan-Slovakia cross-ministerial economics meeting, which is to cover two-way investment, education, culture and tourism, the Ministry of Foreign Affairs （MOFA） said in a statement.

The delegation of 18 senior officials and 25 business representatives is to stay in Taiwan until Friday, the ministry said.

The visit comes at the invitation of National Development Council Minister Kung Ming-hsin （龔明鑫）, who led a 66-member delegation to Slovakia in October.

While Kung was in Slovakia, the two sides signed seven memorandums of understanding aimed at increasing bilateral collaboration in trade and technology, the council said.

Taiwan’s ties with the central European country have improved in the past few months, with Slovakia signing a legal assistance agreement with Taiwan in August and donating 160,000 COVID-19 vaccine doses in September.

The delegations take the aircraft with the Slovakian national emblem and the title "Slovak Republic" emblazoned on its side to arrive in Taiwan yesterday. Photo: Yao Kai-shiou, Liberty Times