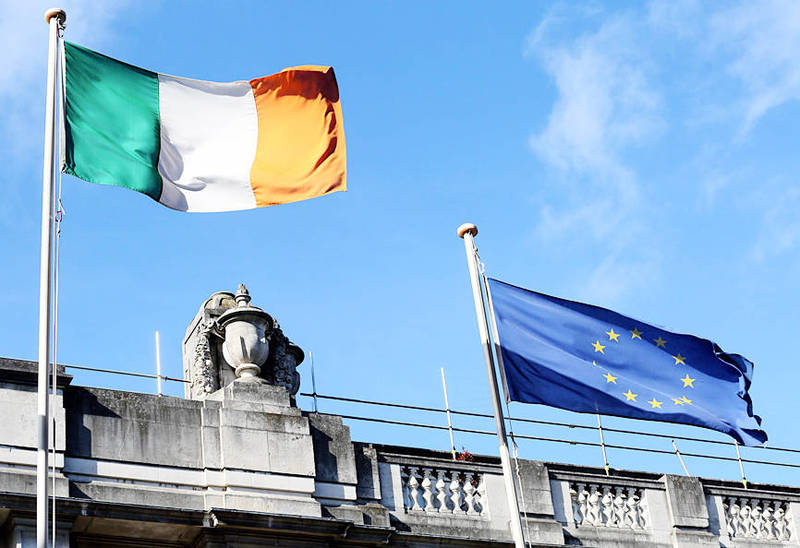 An Irish national flag, left, flies alongside an EU flag in the center of Dublin on Oct. 9, 2018. Photo: AFP

The Irish Senate on Wednesday unanimously passed a resolution seeking to enhance Dublin’s relations with Taipei, while also objecting to Beijing’s plans to possibly take over Taiwan by force.

The resolution called on the Irish government to speak out against ongoing and sustained breaches of human rights in the People’s Republic of China, as well as support the freedom and liberties of the people of Taiwan.

It reiterated that no force should be used in an attempt by China to annex Taiwan.

The resolution condemns Beijing’s treatment of the Uighur population in Xinjiang, and requests the government to deal with the people and government of Taiwan in the manner adopted by most EU member states, including via the EU’s representative office in Taipei.

It condemns all efforts to isolate the people and government of Taiwan from participating in international organizations.

The resolution was jointly initiated by 17 senators, including Irish Senator Michael McDowell.

In Taipei, the Ministry of Foreign Affairs said that it is rare for the Irish Senate to pass a resolution regarding Taiwan.

The Irish Senate had previously only passed resolutions on Taiwan on two occasions, in 2013 and 2015, the ministry said.

In 2013, it supported Taiwan’s meaningful participation in international organizations and signed an economic cooperation agreement with Taipei, while in 2015, it called for an EU-Taiwan bilateral investment agreement, it added.

After the resolution was passed, Representative to Ireland Yang Tzu-pao （楊子葆） thanked the senators for supporting closer relations between the two countries, while expressing the hope that the two sides would continue to cooperate on global challenges.