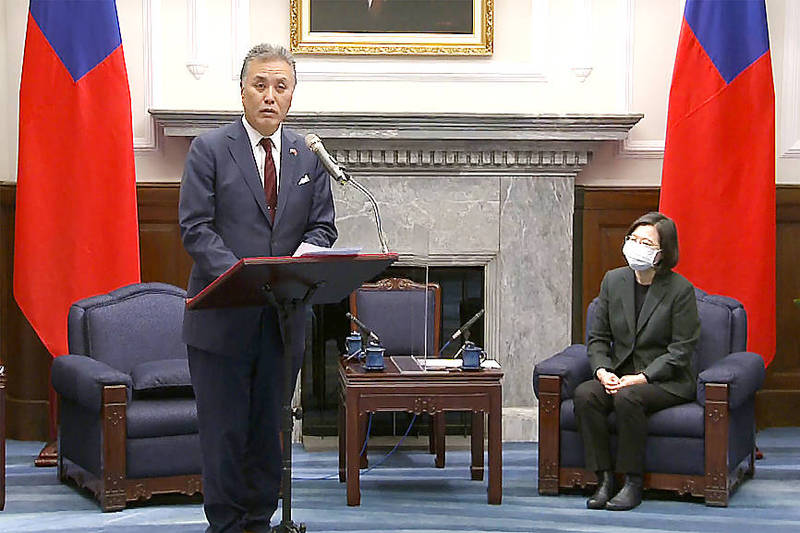 President Tsai Ing-wen, right, looks on as US Representative Mark Takano speaks to the media at the Presidential Office in Taipei yesterday. Photo: AP

CLOSER TIES: The leader of a five-member delegation of US representatives said he hopes that official visits to Taiwan would become ‘business as usual again’

The leader of a US congressional delegation to Taiwan praised the nation as a “force for good” in the world during a meeting with President Tsai Ing-wen （蔡英文） yesterday, and said that under her administration, ties with the US were more productive than in prior decades.

The five members of the US House of Representatives arrived on Thursday night for a two-day trip, the second time in a month that US lawmakers have visited.

Speaking during a meeting with Tsai at the Presidential Office, US Representative Mark Takano, who chairs the House Committee on Veterans’ Affairs, said the lawmakers were in the region to remind partners and allies that the shared responsibility to a free and secure Indo-Pacific region remained stronger than ever.

“Madam President, I want to commend and praise your leadership. Under your administration, the bonds between us are more positive and productive than they have been for decades,” said Takano, who earlier led the group to Japan and South Korea.

“Our commitment to Taiwan is rock solid and has remained steadfast as the ties between us have deepened. Taiwan is a democratic success story, a reliable partner and a force for good in the world,” he added.

Takano said he was hopeful that travel to Taiwan by US policymakers would become “business as usual again,” as the COVID-19 pandemic gradually wanes.

The American Institute in Taiwan said that US representatives Nancy Mace, Colin Allred, Elissa Slotkin and Sara Jacobs were also part of the trip to Taiwan.

Mace and Slotkin said they had received demands from the Chinese embassy in Washington to cancel the visit.

“When News broke of our visit to Taiwan, China’s embassy demanded we cancel the trip （we didn’t）,” Mace wrote on Twitter hours before her arrival in Taipei.

After arriving, Slotkin wrote that her office had received a similarly “blunt message from the Chinese Embassy” telling her to call off the trip.

Welcoming the lawmakers, Tsai said: “Taiwan will continue to step up cooperation with the United States in order to uphold our shared values of freedom and democracy, and to ensure peace and stability in the region.”

Tsai also announced that the Veterans Affairs Council would establish a mission in the US early next year to boost bilateral exchanges.

“Veterans affairs is one area in which Taiwan and the US have enjoyed particularly close cooperation over the past few years,” Tsai said, adding that starting in January “our Veterans Affairs Council will have an official base in Washington.”

Tsai said the office would “help us better coordinate and expand their exchanges in health insurance, quality healthcare, employment assistance and long-term care for veterans.”

The council previously said it is planning to dispatch two retired military officers to the US, who would be housed in the Ministry of National Defense’s mission in Washington.

Additional reporting by CNA and AP