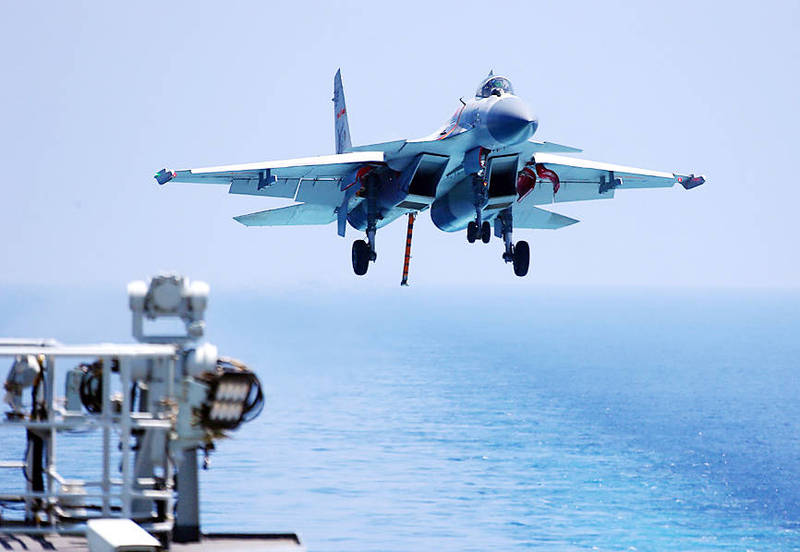 A J-15 fighter jet prepares to land on China’s Liaoning aircraft carrier during a drill at sea on April 14, 2018. Photo: AFP

Taiwan has laid out plans to challenge what it described as China’s “gray zone threats” to shift the balance of power in the region and possibly take over the nation without fighting a battle.

The Ministry of National Defense yesterday outlined in a biennial military strategy report how it aims to counter what it describes as Beijing’s pressure campaign.

It cited warplane incursions, as well as speedboats ramming its coast guard vessels, and accused China of engaging in “cognitive warfare” to sway Taiwanese public opinion.

The military is committed to protecting Taiwan’s sovereignty and democratic system, the ministry said, laying out its strategy for countering China.

“The first and foremost defense undertaking is to prevent war and deter any external military threats, and our overall defense power shall be employed to defend our homeland, magnify the costs and risks entailed by the [People’s Republic of China’s] invasion, and ultimately protect the lives and properties of the people,” it said.

Taiwan has re-emerged as a flash point in US-China ties in the past few months. Washington has been moving to help the government in Taipei take on a bigger role in international organizations like the UN, and US President Joe Biden said last month that the US would come to Taiwan’s aid if it was attacked by China — comments the White House later said did not mark a change in policy.

Yesterday’s report lays out how the military plans to expand the range of its military deterrence to the Chinese coast to create “hostile” embarking and seafaring phases for the Chinese People’s Liberation Army （PLA） forces should they attempt to cross the Taiwan Strait.

“The PLA’s weakness is in the phase of sea transit,” the report said. “The Armed Forces must take full advantage of the natural barrier of the Taiwan Strait and fight in a resilient manner.”

“We should not limit ourselves to waiting for the enemy’s landing groups to sail through the Strait, but should also use measures to force the enemy to assemble forces at airfields or ports further away from areas opposite Taiwan,” it said.

Given China’s overwhelming superiority in terms of personnel and resources, Taiwan plans to utilize asymmetric tactics to nullify the PLA’s advantages, such as countering Chinese airborne operations with mobile surface-to-air missiles and attacking large ships with small, fast and resilient vessels, the report said.

Defensive cruise missiles, and land and sea mines would be key platforms to deter a Chinese attempt to land on Taiwan, it said.

President Tsai Ing-wen （蔡英文） last month told CNN that she was confident the US would come to Taiwan’s defense if China tried to invade, adding that the “threat from China is increasing every day,” while also confirming the presence of some US troops in Taiwan.