《TAIPEI TIMES》 Palau’s president urges the UN to include Taiwan 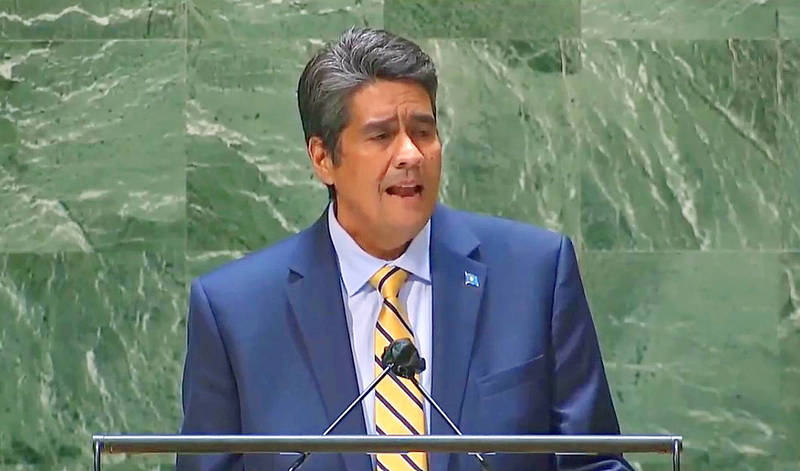 Palauan President Surangel Whipps Jr calls for Taiwan’s participation in the UN on the first day of the UN General Assembly’s 76th session in New York on Tuesday. Photo taken from the official UN Web site

Palauan President Surangel Whipps Jr on Tuesday called for Taiwan’s participation at the UN on the first day of the UN General Assembly’s 76th session in New York City.

In his 13-minute General Debate address, Whipps thanked Palau’s international allies for coming to its aid during the COVID-19 pandemic, in particular Taiwan, the US, Japan and Australia.

More than 80 percent of Palau’s population has been fully vaccinated, and there have been no deaths or hospitalizations resulting from COVID-19, for which the people of Palau are forever grateful, he said.

The Palauan leader highlighted Taiwan’s leadership in the global response against the pandemic and its demonstration of “consistent and effective management of the pandemic within their borders,” efforts that extend to Palau.

“Taiwan’s international response facilitated cooperation and implementation of an effective sterile travel corridor between Taiwan and Palau,” the president said.

The sterile corridor, or “travel bubble,” has allowed the two nations to resume medical and educational cooperation, economic engagement and other benefits of international travel, he said.

“We encourage the UN system to accept Taiwan as a valuable contributor to our collective efforts and strongly advocate for Taiwan’s participation in the UN system,” he said.

With the world facing major challenges, Whipps used the analogy of a Palauan fish, the surgeonfish, to call for global unity.

“The surgeonfish represents a unique characteristic. They fish to graze and roam on the reef alone, eating algae, but once danger lurks, they all swim quickly from wherever they are along the reef and come together in a large school, resembling an intimidating ocean animal to provide safety and security for all,” he said.

He called on the international community to “act like the surgeonfish and come together, including Taiwan.”

“Taiwan’s 23.5 million people must also be given a voice as our UN Charter states,” he said.

“We the peoples of all nations working together can overcome the challenges of our time, from COVID to climate, and act with integrity and resolve to leave a better world for our children,” he said.

He was the first leader of Taiwan’s 15 diplomatic allies to speak at the General Debate, which finishes on Monday next week.

The presidents of Guatemala, the Marshall Islands and Honduras — three more of Taiwan’s diplomatic allies — were to speak at the General Debate yesterday.

Haitian Minister of Foreign Affairs Claude Joseph wrote of Haiti’s support for Taiwan’s inclusion in the UN system on Twitter.

“Faced with the challenges facing our world, in economic, security and health terms, we need a pooling of all forces. The Republic of Haiti reiterates its support for Taiwan’s reintegration into the UN,” Joseph wrote.

Minister of Foreign Affairs Joseph Wu （吳釗燮） wrote on Twitter: “Thank you @claudejoseph03 for choosing to #StandWithTaiwan. The government & people of #Taiwan are grateful for #Haiti’s staunch support of the country’s bid to participate in the @UN system via forums like #UNGA.”