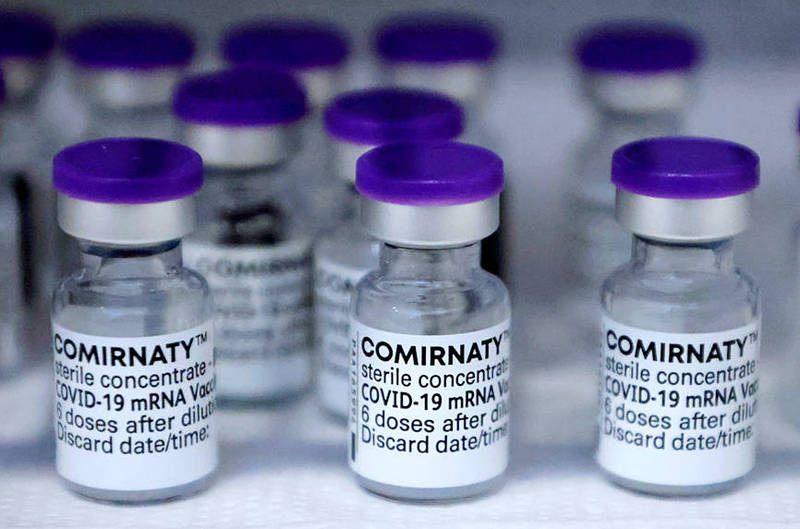 Vials of the Pfizer-BioNTech COVID-19 vaccine are pictured at a doctor’s clinic in Berlin on April 10. Photo: Reuters

DONE DEAL? Mainland Affairs Council Deputy Minister Chiu Chui-cheng said that an early delivery is great if the doses are effective and ship directly from the manufacturer

A batch of the Pfizer-BioNTech COVID-19 vaccine has become available ahead of schedule, the government said late on Wednesday, adding that it was “competing” with other countries for it, while strongly hinting that it was a done deal.

Last month, the companies said that they succeeded in purchasing 10 million doses between them — with an initial shipping date of late next month — and that they would be donated to the government upon delivery.

The Central Epidemic Command Center （CECC） said in a news release on Wednesday that TSMC notified it about a batch originally destined for Shanghai Fosun Pharmaceutical Group Co （上海復星醫藥集團） — BioNTech’s authorized distributor in the region — that would “leave the factory” late this month.

Many countries were competing for the batch, TSMC said, adding that if Taiwan did not obtain it, the batch would be sent elsewhere.

The center did not confirm that Taiwan had obtained the batch, but the rest of the statement suggested that it had.

For example, the center noted that Taiwan approved the Pfizer-BioNTech vaccine for people aged 12 to 18, and that the new school semester is to begin next month.

As long as it could be confirmed that the batch was coming from the original manufacturer and the doses passed the necessary safety inspections, the government would rapidly distribute them for the peace of mind of parents, students and teachers, it added.

As the batch was intended to be sold to “another location,” the packaging would bear the Chinese brand name and the distributor’s name in Chinese on the vial, even though this is not what was agreed upon in the procurement contract, the center said.

However, the government is willing to accept these changes to ensure that a batch arrives earlier than expected, it added.

“As long as the safety and quality of the vaccine doses can be guaranteed, there can be flexibility on the issue of labeling,” the center said.

The center’s news release was issued after Reuters reported on Wednesday that Taiwan would receive a batch of the Pfizer-BioNTech vaccine early after China — the batch’s original destination — had delayed regulatory approval of the vaccine.

The shipment of more than 1 million doses should arrive in Taiwan late this month or early next month, Reuters said, quoting an anonymous source.

The Chinese-language Liberty Times （sister paper of the Taipei Times） yesterday quoted a senior official as saying that Taiwan would receive nearly 2 million vaccines as early as the end of this month.

When asked whether acceptance of the batch with the Chinese labeling would constitute tacit acceptance of Beijing’s “greater Zhonghua area” rhetoric, Mainland Affairs Council Deputy Minister Chiu Chui-cheng （邱垂正） yesterday said that the government’s priority was to address the pandemic.

As long as the doses are effective and arrive directly from the manufacturer, the government accepts the shipment early, he said.

As of yesterday, 41.24 percent of Taiwan’s population of 23.5 million people had received one dose, CECC data showed.

One lives in Taipei and the other in New Taipei City, he added.

The six imported cases were four Taiwanese who traveled from the US, one Japanese from Japan and an American from China, the center said.