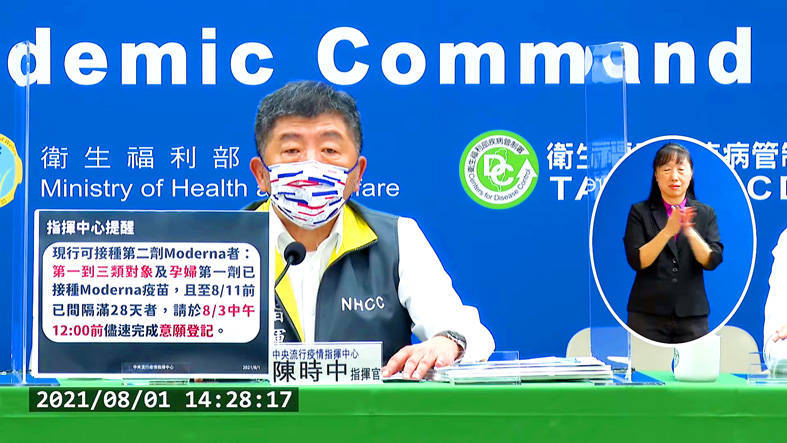 Minister of Health and Welfare Chen Shih-chung speaks at a news conference in Taipei yesterday. Photo: Screen grab from the Internet

CRUCIAL PROTECTION: Changes could be made to an online vaccine registration system to make it more accessible for elderly people, the health minister said

The Central Epidemic Command Center （CECC） yesterday reported 12 locally transmitted COVID-19 infections and two deaths, and urged four groups of people who are eligible to receive the second dose of the Moderna vaccine to register online before noon tomorrow.

Minister of Health and Welfare Chen Shih-chung （陳時中）, who heads the center, said six of the local infections tested positive during or upon ending isolation.

The infection sources of eight cases have been identified, while one remains unclear and three are under investigation, he said.

Chen said six cases were reported in New Taipei City, four in Taipei and one case each in Taoyuan and Taichung.

The CECC reported two imported cases from India and Mexico.

It also said two people with underlying health conditions had died of COVID-19.

Centers for Disease Control Deputy Director-General Philip Lo （羅一鈞）, deputy chief of the CECC’s medical response division, said one of the deceased was a man in his 60s who had chronic diabetes, hypertension, hepatitis and spondylitis, and was living in an institution.

He said the man on Tuesday underwent testing as a close contact of a confirmed case, and was hospitalized after the result came back positive the next day.

He died on Friday, which is a case of rapid deterioration after hospital admission, Lo said.

Chen said people who are in the top three priority groups for COVID-19 vaccination, as well as pregnant women, who received the first dose of the Moderna vaccine at least 28 days before Wednesday next week should register for the second dose using the national vaccination booking system before noon tomorrow.

Local governments have voiced concerns that some elderly people might lack the skills to register and make appointments online.

Chen said the issue was discussed at a meeting with the Cabinet on Saturday.

Officials at the meeting decided that the system should be revised to allow registration and bookings for groups of people, such as long-term care institution residents and elderly people who need to be assisted by borough wardens.

They also decided that Taiwanese without a National Health Insurance number should be allowed to register for vaccination using their national ID number or household ID number, Chen said.

Pregnant women, people who need to travel abroad for official business or emergencies and people who developed serious adverse events after receiving the first dose of the vaccine should be allowed to get vaccinated at contracted hospitals designated by local governments, after being evaluated by a healthcare facility, he added.

Chen said the conclusions of the meeting would be discussed with local governments, and the items might be revised if the governments find them difficult to implement.

Reporters asked whether the CECC would change its strategies after US media reported on an internal document from the US Centers for Disease Control and Prevention saying that the Delta variant of SARS-CoV-2 is as contagious as chickenpox and appears to cause more severe illness.

CECC specialist advisory panel convener Chang Shan-chwen （張上淳） said the virus circulating in Taiwan is the Alpha variant, and experiences in many countries have shown that vaccines provide effective protection against it, especially in reducing deaths and severe illness from COVID-19.

It is crucial to stop the Delta variant at national borders and prevent it spreading in local communities, he said.

Non-pharmaceutical measures, including crowd controls, wearing a mask, hand hygiene and social distancing, are still important actions that must be taken, he added.