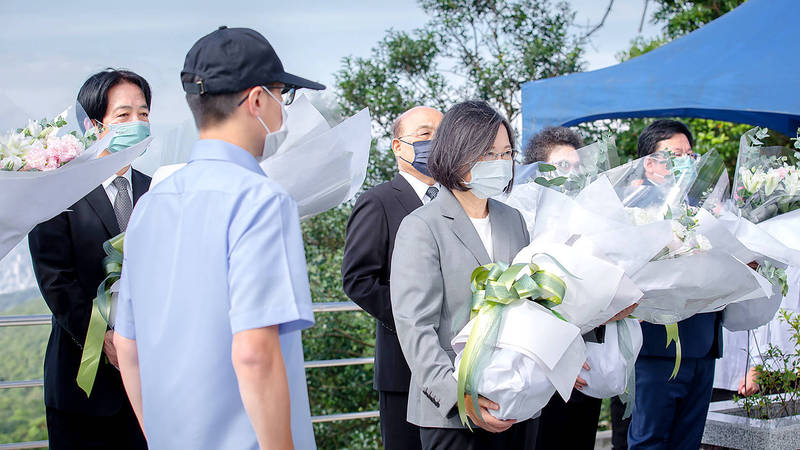 JAPANESE THANKS: Japanese Defense Minister Nobuo Kishi said the former president was Taiwan’s father of democracy and should be thanked for his achievements

President Tsai Ing-wen （蔡英文） yesterday led an entourage of top-ranking government officials to pay their respects to former president Lee Teng-hui （李登輝）, who passed away one year ago at the age of 97.

“We look back at Taiwan’s winding path to democracy tread by forerunners and treasure the free air that we enjoy,” Tsai wrote on Facebook after leading the group to Lee’s grave at the Wuzhi Mountain Military Cemetery in New Taipei City’s Sijhih District （汐止）.

“We will travel on the path of Taiwan’s democracy with determination,” she wrote.

Vice President William Lai （賴清德） wrote on Facebook that on the trip to the cemetery, he had reminisced about his meetings with Lee in Tainan.

Lee never hesitated to share his thoughts and spoke many times about the importance of humility, equanimity and the ability to endure in life and politics, Lai wrote.

Lee would be moved and gladdened by the performance of Taiwanese athletes at the Tokyo Olympics and the acknowledgment of the national team by television anchors in Japan, he wrote.

“Lee’s spirit will be forever with us after the departure of his body and we thank him for creating a diverse, democratic and vital Taiwan,” he wrote. “Lee bound his life to the nation’s destiny. He brought immense wisdom and courage to bear at a crucial moment in Taiwanese history that contributed to the nation’s smooth transition to democracy.”

“We hope to usher an era of pride and happiness for Taiwanese on the foundation Lee laid down, for the country to obtain more dignity and self-respect,” he added.

Lee was a voracious reader and academic whose books would provide guidance to the library’s users and bear testimony to the shared history between Taiwan and Japan, the association wrote on Facebook.

The books were donated to the association by the Lee Teng-hui Foundation, it wrote.

“We hope that Lee would bless the friendship between Taiwan and Japan from above so that it will last in perpetuity,” it added.

Meanwhile, Japanese Minister of Defense Nobuo Kishi thanked Lee for contributing to the friendship between Taiwan and Japan.

Lee is the father of democracy in Taiwan and he should be thanked for his achievements in developing Taiwan and furthering its relationship with Japan, Kishi wrote on Facebook and Twitter.

“I again express my heartfelt sorrow at his passing and my belief that his undiminished spirit is being carried on by people all around the world,” he wrote.

“We will continue to forge our path with comrades who share our values of democracy and human rights,” he added.

Kishi did not accompany Mori with a second delegation the following month, as by then he had been made defense minster.