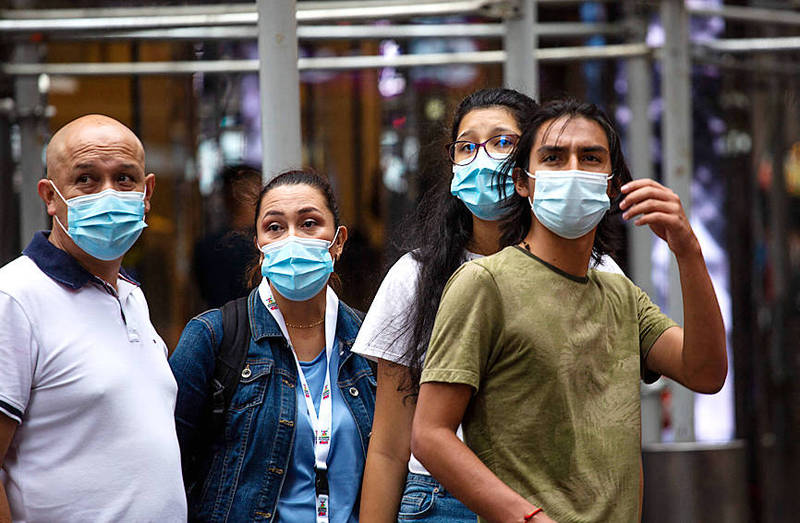 Governments around the world are racing to head off a surge in COVID-19 cases driven by the Delta variant of SARS-CoV-2, with US President Joe Biden offering new incentives to vaccine holdouts and Israel authorizing booster shots, as Japan yesterday extended a state of emergency.

The WHO on Thursday warned that the highly transmissible strain of the virus, first detected in India, could unleash a “fourth wave” of cases in its Eastern Mediterranean zone — an area stretching from Morocco to Pakistan.

Those countries are especially at risk because vaccination rates are low — only 5.5 percent of the region’s population has been fully vaccinated. In nations where vaccines are more available, public officials are sounding the alarm.

“People are dying — and will die — who don’t have to die,” Biden said in a speech on his administration’s new initiatives aimed at curbing the spread. “If you’re out there and unvaccinated, you don’t have to die.”

He said that all federal government workers would be asked to reveal their vaccination status — and those without the jab would have to wear masks in the workplace and submit to COVID-19 tests.

Biden also said he would ask the Pentagon to consider making the COVID-19 vaccine mandatory for active duty military personnel, and asked state and local governments to offer US$100 to holdouts who get the shot.

“If incentives help us beat this virus, I believe we should use them. We all benefit if we can get more people vaccinated,” Biden said.

Israeli Prime Minister Naftali Bennett announced that those older than 60 would be offered a third dose of a vaccine — a booster shot available from tomorrow.

“I call on all elderly people who have already been vaccinated to receive this additional dose,” Bennett said. “Protect yourselves.”

“The decision was based on considerable research and analysis, as well as the rise in risk of the Delta variant wave,” Bennett said.

Israel quickly rolled out its vaccination campaign and had dropped many restrictions on public gatherings last month, but infections soared, and masks are once again mandatory in enclosed public places.

The US Centers for Disease Control and Prevention has also urged people living in COVID-19 hot spots — even the vaccinated — to wear masks indoors.

The surge in cases across the US has left the early vaccine adopters angry at those who have so far opted against the jab.

“It’s almost like they don’t care about the rest of the world. They’re being selfish and self-centered,” said Alethea Reed, a 58-year-old health care administrator in Washington.

In Japan, the government yesterday extended a state of emergency in Tokyo and imposed the measure in four more regions, as cases surge a week into the postponed Olympics.

The Japanese capital reported a record number of new infections on Thursday, as daily cases nationwide topped 10,000 for the first time.

Olympic organizers reported 27 new cases related to the event — the highest daily figure yet — although they insist there is nothing to suggest a link to rising infections in Japan.