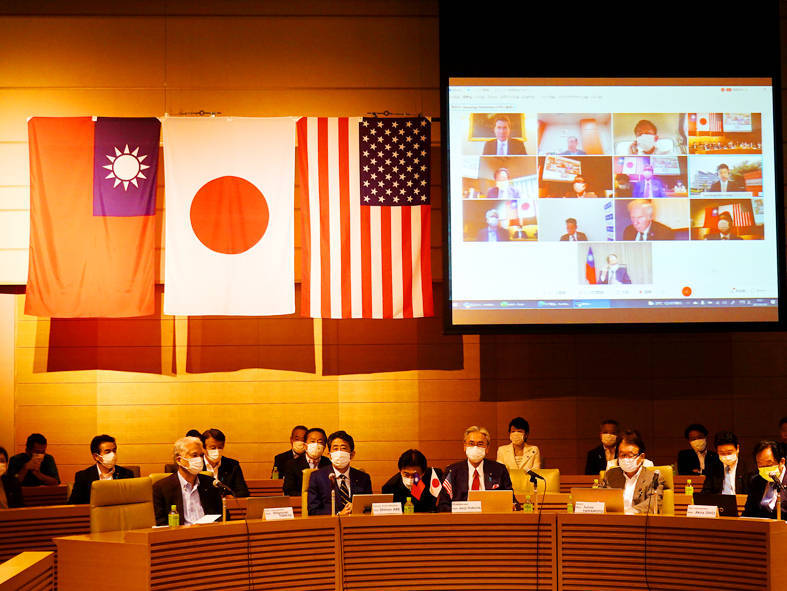 Initiated by Japan-ROC Diet Members’ Consultative Council chairman Keiji Furuya, the first edition of the forum was mainly organized by Japan, the Ministry of Foreign Affairs said in a news release.

The forum is a historically and strategically significant tool for reinforcing ties between the countries, it said, adding that discussions covered regional security, economic issues and cooperation among like-minded partners.

Participants agreed on the importance of improving multilateral cooperation to maintain security across the Taiwan Strait, supporting Taiwan’s bid to join the Comprehensive and Progressive Agreement for Trans-Pacific Partnership （CPTPP） and holding the forum in coming years, it said.

Finding ways to deal with a rising China is the primary lesson for the international community in this century, Abe said.

China’s rise could have been a big opportunity for other countries had Beijing complied with WTO regulations, he said.

However, China has unnerved other countries with its military spending — which has increased 42 times in 30 years — while Beijing has been attempting to change the “status quo” in the South China and East China seas, he added.

Japan, the US and many other countries are worried about Hong Kong, and “we firmly believe that Hong Kong’s situation must never happen in Taiwan,” he said.

Abe voiced support for Taiwan to join the World Health Assembly, the decisionmaking body of the WHO, as well as the CPTPP, while calling on the US to rejoin the trade bloc.

Six Japanese lawmakers participated in the forum, while 18 more observed.

Japan is focusing more on Taiwan, even underlining the importance of its stability in this year’s Defense of Japan white paper and other official statements, Japanese Minister of Defense Nobuo Kishi said in a statement, adding that he hoped the trilateral strategic forum would play a new role in the global community.

Taiwan’s delegation was led by Legislative Speaker You Si-kun （游錫?）, who is also chairman of the legislature’s Taiwan-Japan Parliament Members Friendship Association.

He was excited to again meet “old friend” Abe at the forum, You wrote on Facebook afterward.

In his speech at the forum, You thanked Washington and Tokyo for donating COVID-19 vaccine doses to Taiwan, while calling on the two countries to engage other allies in defending the region’s peace and stability against China’s expansionism.

The US and Japan should recruit allies to warn China that if it used force, they would immediately recognize Taiwan’s diplomatic status, he said.

He expressed the hope that Taiwan could join the Quadrilateral Security Dialogue comprised of the US, India, Australia and Japan, known as the Quad.

He also urged the US and Japan to sign a bilateral trade agreement or free-trade agreement with Taiwan and to support Taiwan’s bid to join the CPTPP.

Washington was represented by US senators Bill Hagerty and Edward Markey, and US Representative Steve Chabot.