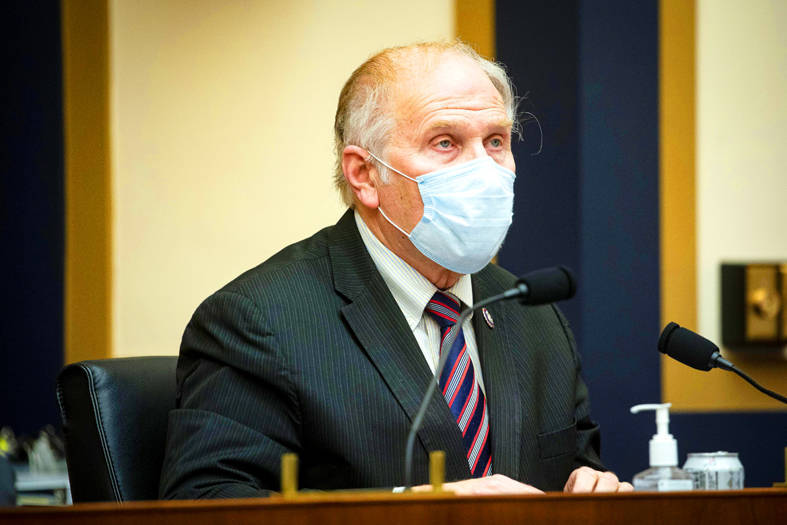 US Representative Steve Chabot speaks at a subcommittee hearing on Capitol Hill in Washington on Feb. 24. Photo: AFP

NO ‘ONE CHINA’ LIE: The appropriations act passed the US House of Representatives with a vote of 217-212, but still needs Senate approval and the president’s signature

The US House of Representatives on Wednesday passed a foreign assistance spending bill with an amendment forbidding that funds be used to create, procure or display maps depicting Taiwan as part of the People’s Republic of China.

The amendment was introduced by five Republican representatives — Tom Tiffany, Steve Chabot, Scott Perry, Kat Cammack and Mike Gallagher — and passed unanimously in a bundle with a dozen other amendments.

“This is a common sense measure,” Tiffany said, speaking on the House floor on Wednesday. “As we all know, Taiwan has never been part of communist China. The Taiwanese people elect their own leaders, raise their own armed forces, conduct their own foreign policy and maintain their own international trade agreements.”

“By every measure, Taiwan is a sovereign, democratic and independent country,” he said. “Any claims to the contrary are simply false.”

Tiffany told his colleagues that the US should abandon its dishonest “one China” policy, which acknowledges “Beijing’s bogus argument that Taiwan is part of Communist China.”

While this amendment cannot achieve that goal, it would “at least require honest maps that stop perpetuating the ‘one China’ lie,” he added.

The full spending bill, titled “Department of State, Foreign Operations and Related Programs Appropriations Act 2022,” passed with a 217-212 vote. The bill next heads to the US Senate and, if approved, would be sent to US President Joe Biden to be signed into law.

In other news, a US Navy destroyer on Wednesday transited the Taiwan Strait, the seventh time a US battleship has navigated the waterway separating Taiwan and China since Biden took office on Jan. 20.

“The Arleigh Burke-class guided missile destroyer USS Benfold conducted a routine Taiwan Strait transit on Wednesday through international waters in accordance with international law. The ship’s transit through the Taiwan Strait demonstrates the US commitment to a free and open Indo-Pacific,” the US 7th Fleet said in a statement.

Since January, US warships — all Arleigh Burke-class guided missile destroyers — have made similar transits through the Strait.

Over the past few years, the US has sent warships into the region in what is seen as an attempt to counterbalance China’s growing military presence in the Taiwan Strait, the South China Sea and neighboring waters, and to show its continued commitment to maintaining peace and stability in the region.

In Taipei yesterday, the Ministry of National Defense confirmed the passage of the USS Benfold through the Strait.

During the ship’s passage, sailing from south to north, the military used joint intelligence, surveillance and reconnaissance tools to monitor movements at sea and in the air around Taiwan, the ministry said, describing the situation as normal.

However, the US warship’s passage was met with strong criticism from China yesterday.

Shi Yi （施毅）, a spokesperson for the Chinese People’s Liberation Army Eastern Theater Command, described the maneuver as yet another provocative move by the US.