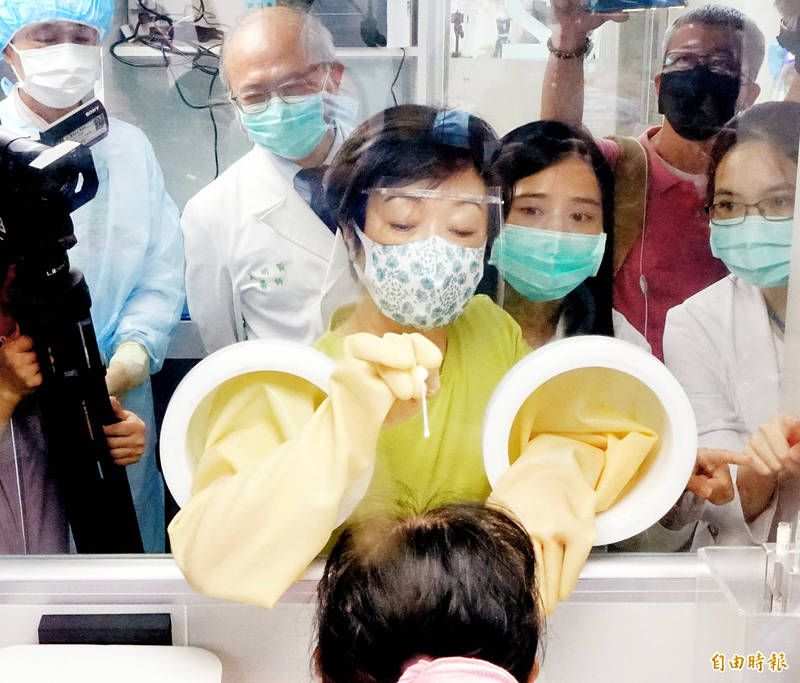 Of the new local infections, 64 are male and 65 are female, with the onset of their symptoms occurring between June 4 and Wednesday, the center said.

Seventy-three of the cases are people who tested positive during or at the end of their home isolation or quarantine, it said.

New Taipei City again recorded the most local transmissions, with 54 cases, followed by 35 in Taipei, nine in Keelung and seven in Taoyuan, it said.

Pingtung County and Kaohsiung reported six cases each, Miaoli and Hsinchu counties each had five cases, and Nantou County had two.

The six deaths were five men and one woman aged in their 50s to 90s, each of whom had a history of chronic illness, and they died between Friday last week and Wednesday, CECC data showed.

Although the number of daily deaths has fluctuated, they are expected to decline, Centers for Disease Control Deputy Director-General Philip Lo （羅一鈞）, who is deputy head of the CECC’s medical response division, told a daily news briefing in Taipei.

The CECC would offer a summary on the situation in one week, he added.

The imported case is a Taiwanese woman in her 60s who arrived from Brazil on June 9, the center said.

She was quarantined at a centralized facility upon arrival and underwent a test for COVID-19 on Tuesday, before the end of her quarantine period, it said.

As she developed no symptoms while in Taiwan and did not come into contact with others during her quarantine, no contacts had been identified, it added.

Of the deaths, 597 were from local infections, while eight were imported cases, the center said.

From April 20 to Wednesday, 625 students were confirmed to have COVID-19, up from 622 on Tuesday, according to Ministry of Education data.

Of the cases recorded after April 20, 2,444 people, or 18.5 percent, had severe pneumonia or acute respiratory distress syndrome, Lo said.

Of the 4,933 people related to the clusters who have received a rapid test, 15 tested positive, but only four also tested positive through polymerase chain reaction （PCR） testing, he said.

The cluster “is not as bad as you all think,” Ko said, adding that there have been many false positives.

As PCR capacity improves, it would gradually be used for initial testing, especially for large-scale cases like TAPMC, he said.

Officials are still working to control the cluster, Ko added, urging people with symptoms to be tested.

The figure is expected to surpass 4,000 today, she added.