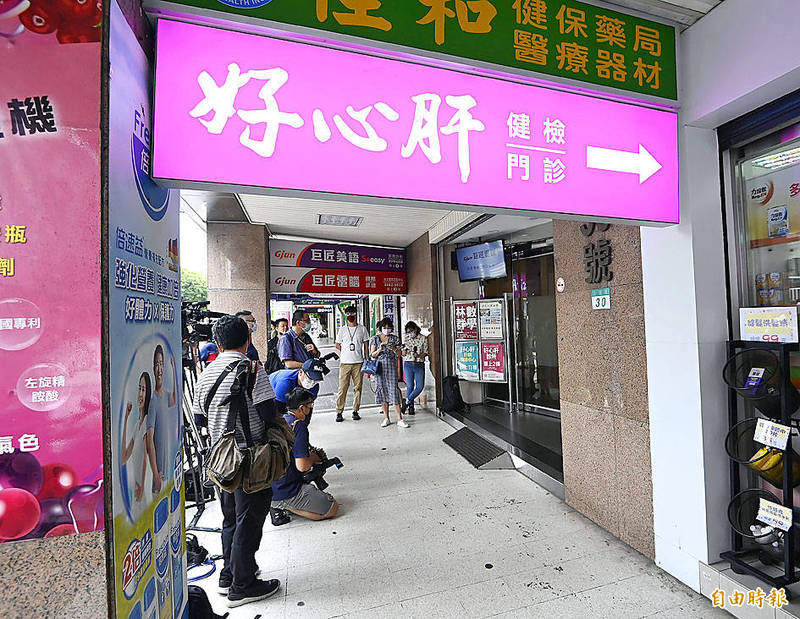 A Good Liver Clinic sign at an entrance to one of its branches is pictured in Taipei yesterday. Photo: Chen Chih-chu, Taipei Times

Prominent businesspeople and figures in entertainment yesterday said that they were on a list and had been vaccinated for COVID-19 at a Good Liver Clinic （好心肝診所） branch in Taipei.

PChome Online Inc chairman Jan Hung-tze （詹宏志） said that he was on the list and had received the vaccination at one of the clinic’s branches, as did TV and radio host Alvin Hou （侯昌明）, actors Kuo Tzu-chien （郭子乾） and Jamie Weng （翁家明）, and iQiyi executive Young Min （楊鳴）.

Judicial personnel are investigating alleged breaches of the law amid a public outcry over the vaccinations, which the clinic said were conducted in the belief that all of Taipei’s healthcare workers had been inoculated.

Critics said that the clinic had favored “wealthy and famous” people to receive its allocation of AstraZeneca vaccines, which would be a breach of Central Epidemic Command Center （CECC） policy to prioritize frontline medical personnel, police and emergency-response workers, among others.

Lists published online have been claimed to be of names of those in line to receive vaccines at the clinic.

Taipei Mayor Ko Wen-je （柯文哲） said that he had handed a list, apparently of names of people who Good Liver Clinic had vaccinated, over to prosecutors.

Prosecutors on Thursday questioned clinic director Sheu Jin-chuan （許金川） and 11 others, and searched clinic offices, as well as Taipei Department of Health offices.

Prosecutors said that corruption charges would be brought if evidence shows that health officials colluded with the clinic to obtain extra allotments of vaccines through falsified requisitions.

The Taipei Medical Association condemned the Taipei City Government in a press release.

“At the time this was written, more than 5,000 medical personnel at Taipei hospitals and clinics have not received jabs, but Good Liver Clinic was provided with vaccines to inoculate people affiliated with its office and even members of the public,” the statement said, demanding that the city government and the clinic explain who authorized its actions.

Meanwhile, prosecutors have initiated an investigation into reports of “VIP access” to COVID-19 vaccines at Taichung Veterans General Hospital.