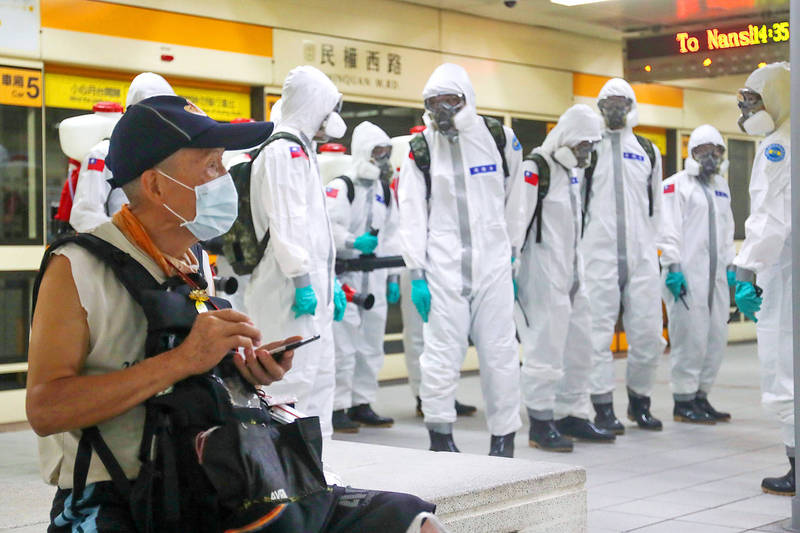 SLOWING: The virus’ Rt value, which predicts the number of people a patient could infect, has dropped to 1.02 and must fall below one for the outbreak to be under control

The local COVID-19 situation is at a critical threshold, but it can hopefully be brought under control in the next couple of weeks, the Central Epidemic Command Center said yesterday.

The center made the remarks after reporting 274 locally transmitted cases, 73 backlogged cases and 15 deaths.

Of the 274 local infections, 129 are male and 145 are female, from under the age of five to older than 90, said Minister of Health and Welfare Chen Shih-chung （陳時中）, who heads the center.

They began showing symptoms between April 29 and Sunday, he said.

They began experiencing symptoms between May 14 and Saturday, he added.

Among all 347 cases reported yesterday, 171 live in New Taipei City, followed by Taipei with 122, Taoyuan with 27, Changhua County with 10, Taichung with five, Keelung and Miaoli County with three each, Hsinchu City with two, and one each in Kaohsiung, and Hualien, Penghu and Hsinchu counties.

Two of the 54 cases who do not live in Taipei or New Taipei City had visited Taipei’s Wanhua District （萬華）, 46 have clear infection sources, and six have an unclear association with previous cases, Chen said.

The 15 deaths due to COVID-19 are nine men and six women, aged 60 to 100. They began experiencing symptoms between May 11 and Friday, and tested positive between May 17 and Sunday. They died between May 21 and Saturday.

Among those aged 60 or older, 27.5 percent experienced serious COVID-19 symptoms, which is a relatively high percentage, he said, adding that many of them have underlying health conditions or are elderly people.

Since the center began adding backlogged cases on May 21, the number of daily backlogged cases has gradually dropped from a peak of 400 on May 21 to 89 on Sunday and 73 yesterday, showing that the pending cases are being cleared, and as a result the efficiency of placing confirmed cases under isolation would increase, Chen said.

The CECC will continue to make rolling adjustments to the implementation of enhanced disease prevention measures under the level 3 COVID-19 alert and endeavor to shorten the period between a person undergoing testing and being placed under isolation, which would bring the virus under control, he said.

The CECC has also ordered monoclonal antibody drugs, which would be administered to patients who are at a high risk of developing severe symptoms from COVID-19 to protect them and reduce the burden on the healthcare system, he added.

“The recent wave of local outbreaks has gradually slowed down,” Chen said, citing the latest effective reproduction number （Rt）, which has dropped to 1.02 from a peak of about 15 from May 13 to 15.

The COVID-19 alert was raised to level 3 in Taipei and New Taipei City on May 15, and nationwide on May 19, Chen said, adding that the decline in the Rt value shows that people’s compliance with the enhanced public health measures has been effective.

CDC Deputy Director-General Chuang Jen-hsiang （莊人祥）, who is the CECC’s spokesperson, said most people are more familiar with the basic reproduction number （R0）, which refers to the predicted average number of people who contracts the disease from an infected person, in a population where everyone is susceptible.

When the Rt value is one, it means that each infectious person can on average transmit the disease to one other person, and if the Rt value drops below one, there would be a decline in the number of cases, bringing the epidemic under control, he said.

“Having gone through a period of implementing enhanced measures, we are at a critical threshold,” Chen said. “I want to tell everyone that their sacrifices and efforts have been effective [in curbing the spread of COVID-19], but we must continue them in the next couple of weeks to bring the Rt value to below one.”