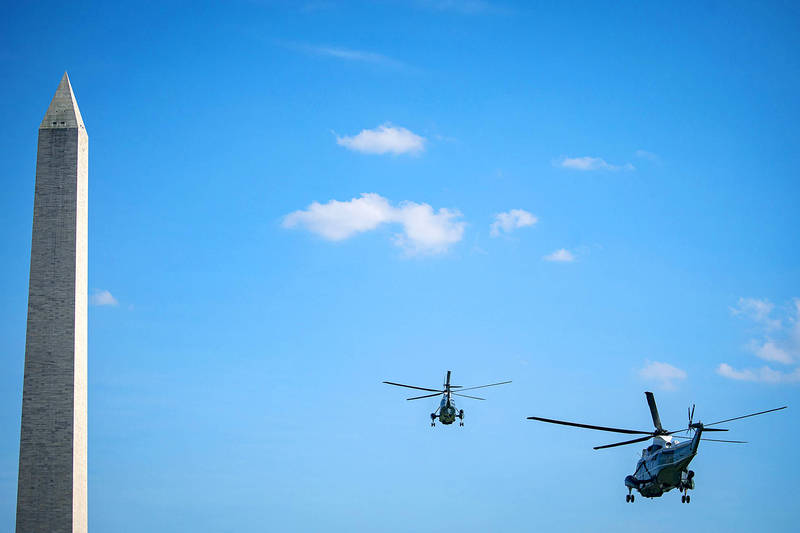 Marine One flies near the Washington Monument as it departs the Ellipse near the White House in Washington on Thursday. Photo: Bloomberg

The defense spending request, which was to be sent to the US Congress yesterday, was expected to contain investments in troop readiness, space, the Pacific Deterrence Initiative aimed at countering China’s military buildup in the region and nuclear weapons technology, the people said.

The budget request would buy ships, jets and pay for maintenance and salaries, but an additional US$38 billion is earmarked for defense-related programs at the FBI, the US Department of Energy and other agencies, bringing the national security budget to US$753 billion, a 1.7 percent increase over the figure for this year.

There would also be money to further develop and test hypersonic weapons and other “next generation” weapons systems as the military aims to build capabilities to counter Russia and China.

Presidential budget requests, including those for the military, are commonly a starting point for negotiations with Congress, which ultimately decides how funds are spent.

At a hearing before the House Defense Appropriations panel on Thursday, some Republicans called the budget for the year that begins on Oct. 1 insufficient, making it more challenging to compete with China in the South China Sea or in a potential conflict over Taiwan.

“We’re beginning to lose our critical competitive edge in many domains,” US Representative Hal Rogers said.

US Joint Chiefs of Staff Chairman General Mark Milley in written testimony said that China is the US’ top geostrategic security challenge, but that war with the Asian nation is “not inevitable.”

“We need to keep our relationship at competition, not conflict,” Milley said. “This is best done through integrated deterrence, where the United States remains militarily strong relative to China and we retain military overmatch in all the various domains of war.”

The Pacific Deterrence Initiative, created to counter China, focuses on competition in the Indo-Pacific region, and aims to boost US preparedness through funding radars, satellites and missile systems.

To pay for this, the Pentagon is seeking to divest some of its older equipment with higher maintenance costs, including four littoral combat ships and several A-10 aircraft, which provide close air support to ground troops, as well as KC-10 and KC-135 planes in the mid-air refueling fleets, people familiar with the shift said.

Tensions with an increasingly assertive China are on the minds of US military planners. Beijing accused the US last week of threatening peace and stability in the Taiwan Strait after a US warship again sailed through the sensitive waterway.

Despite shaving numbers from older systems, the Biden administration would continue to invest in modernizing the US nuclear triad, an expensive undertaking that would cost an average of more than US$60 billion per year over this decade and more than US$1 trillion in total, according to the Congressional Budget Office.

《TAIPEI TIMES》 Medigen not acceptable for U…