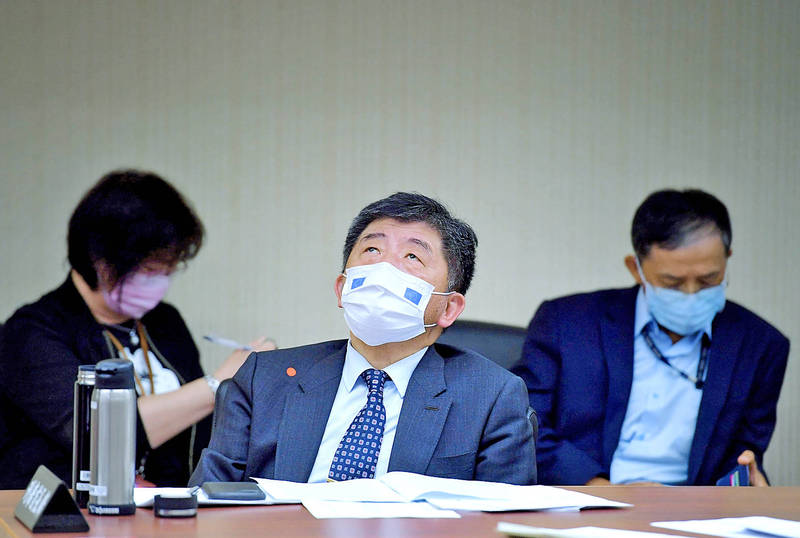 PRIVACY SOUGHT: A testing station has been set up, but media were asked not to photograph it, as it might put people off amid a cluster linked to adult businesses

The Central Epidemic Command Center （CECC） yesterday sent 600,000 text messages to people who had been in Taipei’s Wanhua District （萬華） between April 15 and Wednesday, asking them to be tested at designated community facilities if they have had symptoms such as fever, diarrhea, or loss of taste or smell since April 15.

The center made the announcement after reporting 25 new COVID-19 cases yesterday, 13 locally transmitted and 12 imported.

Nine of the local cases were found to have dined at the same restaurant as case No. 1,203, an ex-president of a Lions Club chapter in New Taipei City’s Luzhou District （蘆洲）.

Three are women who work at different tea houses in Wanhua.

Another case is a man in his 60s who is a regular visitor to the district, the center said.

Wanhua, known for its diverse adult entertainment venues, is a relatively complex area in terms of containing the virus’ spread, Minister of Health and Welfare Chen Shih-chung （陳時中）, who heads the CECC, told a news briefing in Taipei.

As residents and visitors are exposed to higher risks of cross-infection, the Taipei City Government has asked adult business venues in the district to cease operations for three days following reports of locally transmitted cases there, Chen said.

Deputy Minister of the Interior Chen Tsung-yen （陳宗彥）, the CECC’s deputy head, public health specialists and the Wanhua Police Precinct said that the block where most of adult venues are in Wanhua is bordered by Kangding Road （康定路） to the east, Heping W Road Sec 3 （和平西路三段） to the south, Wuzhou Street （梧州街） to the west and Gweilin Road （桂林路） to the north.

“We started tracing people who have visited the area back to April 15 hoping to find the source of the infections,” Chen Tsung-yen said, adding that 600,000 warning messages had been sent via the cell broadcast system as of 2pm yesterday.

The Taipei City Government has set up a workstation in the community to facilitate testing of workers and visitors in the district to help maintain their privacy, the center said.

“We would ask the news media to refrain from taking pictures or filming people at the workstation, as it could deter them from being tested, compromising efforts to contain the outbreak,” Chen Shih-chung said, adding that disclosing their identities could potentially create family and social problems.

A cluster linked to case No. 1,203 in Luzhou involved 20 people, with some of them having visited tea houses in Wanhua, it said.

The other cluster was linked to tea houses in Wanhua, with five tea house workers and one customer infected, it said, adding that one of the cases had traveled to two arcades in Yilan County’s Jiaosi Township （礁溪）.

The arcades are branches of the Galaxy Baccarat （銀河百家樂） gambling operation in Yilan’s Luodong Township （羅東）, where earlier this week four employees and a frequent customer were confirmed to have contracted COVID-19, the center said.

The genomes of the viruses involved in the two clusters, as well as cases linked to the Novotel Taipei Taoyuan International Airport hotel, showed that they all came from the British variant, Chen Shih-chung said.

“We need to conduct further contact tracing to determine the exact relationship between the three clusters,” he said.

However, Chen Shih-chung said that the possibility of raising the COVID-19 warning to level 3, a near-lockdown, had diminished.

The 12 imported cases were five arrivals from the Philippines, six from India and one from Uganda, the center said.

As of yesterday, the nation had recorded 1,256 cases with 12 deaths, while 142 are still hospitalized, center data showed.