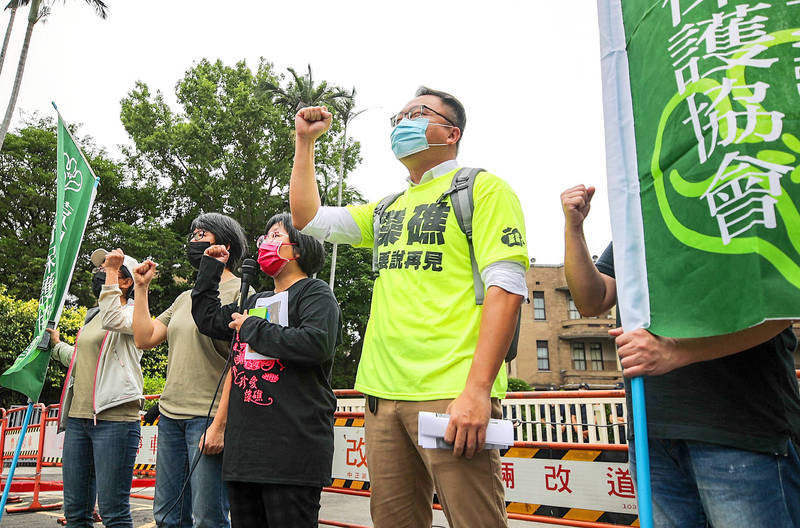 Members of an algal reefs alliance pushing for a referendum against a liquefied natural gas receiving station near Taoyuan protest outside the Executive Yuan in Taipei on Monday, demanding that the government change the site of the proposed project. Photo: CNA

Environmental groups are split over an Executive Yuan proposal to move a proposed liquefied natural gas （LNG） terminal an additional 455m from the coast of Datan Borough （大潭） in Taoyuan’s Guanyin District （觀音） to reduce its impact on algal reefs.

The planned terminal has sparked an outcry from environmentalists, who fear that it would damage the algal reefs in the area. They have successfully petitioned for a referendum to block the project.

However, support for the referendum has wavered and environmental advocates are divided on the issue, Taiwan Citizen Participation Association director-general Ho Tsung-hsun （何宗勳） said.

The Cabinet on Monday proposed moving the terminal farther from the shore for a total of 1.2km and scrapping a planned turning basin to allay fears of damage to the reefs, as the new location would have sufficient depth, and forgo 21 hectares of land reclamation.

Should the proposal be approved, it would delay the terminal’s completion by two years and add NT$15 billion （US$536.63 million） to the project’s budget.

Ho said that while he appreciated the Executive Yuan’s efforts to find a solution, he would nonetheless support the referendum sponsored by Rescue Datan’s Algal Reefs Alliance convener Pan Chong-cheng （潘忠政）.

The issue has become polarized and Pan should not remain silent, Ho said, calling for more hearings on the matter to clear up lingering doubts.

Citizen of Earth, Taiwan yesterday issued a statement applauding the Executive Yuan’s proposal, saying that it would have the least impact on the government’s goal of reducing carbon emissions.

The proposal should be reviewed by an environmental impact assessment committee before the referendum on Aug. 28, the group said.

Former Environmental Protection Administration （EPA） deputy minister Chan Shun-kuei （詹順貴） told a news conference that Pan’s concern for the reefs is legitimate, but is not backed by any scientific study suggesting that the terminal would directly harm them.

Pan, who has demonstrated that he has a support base by meeting the referendum threshold, should now come to the negotiation table, he said.

Chan said he did not mean for his comments to be taken as support for the government, adding that the wanted to portray the diversity of opinion on the issue.

The Executive Yuan’s proposal is the optimum compromise between power security and environmental protection, Su said.

Democratic Progressive Party Legislator Hung Shen-han （洪申翰） said that the current plans for the terminal greatly differ from the original version in 2015, and the changes reflect environmental concerns.

The government has considered relocating the terminal’s planned site in 2018, but a proposed site was reserved for a planned offshore wind farm.

The license for the wind farm has since been canceled due to flight safety concerns, Hung added.