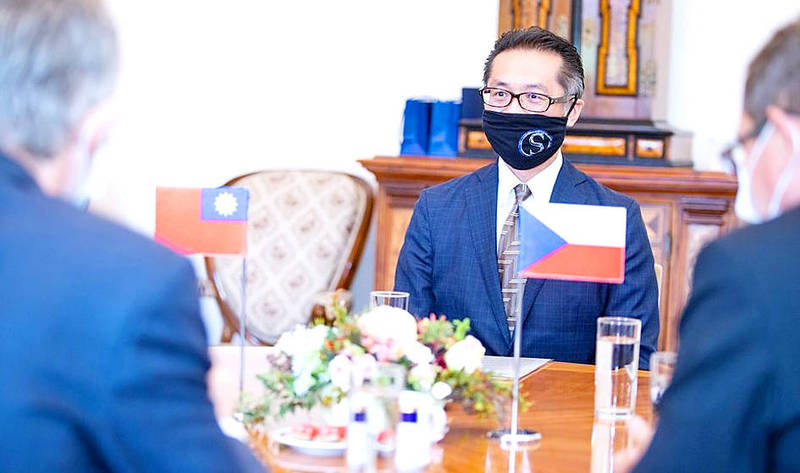 Prague-based think tank the European Values Center for Security Policy on Tuesday said that it would open an office in Taipei as part of a program focusing on Chinese influence operations, even as Taiwan drew criticism for allegedly financing the plan.

The center revealed its plan to establish a footing in Taiwan during the Stratcom Summit in November last year, which was also attended by Deputy Minister of Foreign Affairs Harry Tseng （曾厚仁） amid warming Taipei-Prague ties.

The planned Taipei office would open in the second half of the year as part of the think tank’s Red Watch Program, which focuses on Chinese influence operations, the center said in a news release on Tuesday.

Representative to the Czech Republic Ke Liang-ruey （柯良叡） signed a partnership agreement with the center regarding the Taiwanese government backing the opening of the office, the center added.

“Taiwanese institutions have much to say about Chinese interference activities and how to deal with them. They have studied and resisted the Chinese communist regime for decades, which is something that Europeans need to learn as well,” center director Jakub Janda was quoted as saying in the news release.

Richard Kraemer, who would head the Taipei office, joined the center last year as senior analyst for the Western Balkans and is president of the US-Europe Alliance’s board, it said.

The center, established in 2005, has 24 employees and is one of the largest non-governmental organizations （NGOs） focused on foreign interference in Europe, the center added.

While the central government has welcomed quality NGOs to establish local offices, it would be unusual for it to sign such an agreement with an organization.

Separately, a source familiar with the matter said that the Ministry of Foreign Affairs would subsidize the center, including the salaries of its personnel in Taiwan.

In the 2019 Global Go To Think Tank Index Report, the center only ranked No. 118 out of 141 organizations in western Europe, while the Taiwan Foundation for Democracy ranked ninth in Southeast Asia, the person said on condition of anonymity.

If the ministry courts a foreign think tank with “dollar diplomacy,” it is questionable whether the think tank would produce credible reports, the person added.

Asked for comment, the ministry said that it needed time to deliberate over the matter. It had yet to respond as of press time last night.