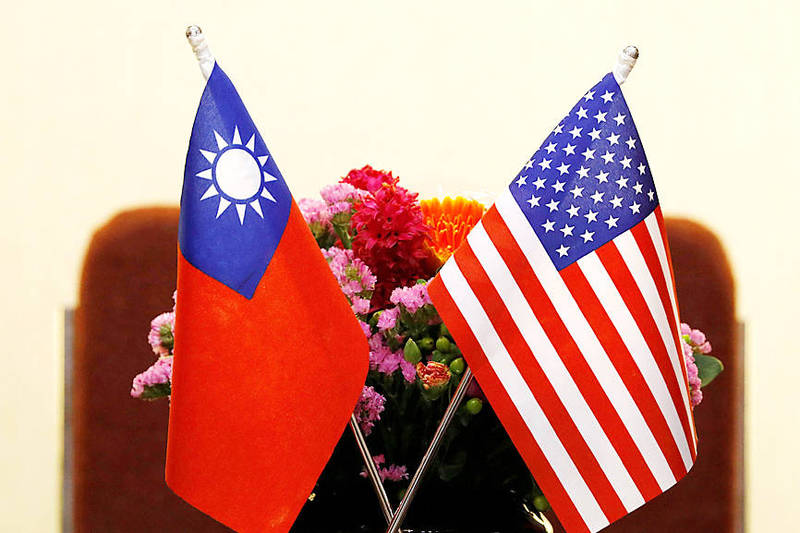 National flags of Taiwan and US are placed for a meeting between then-US House of Representatives Foreign Affairs Committee chairman Ed Royce and then-legislative speaker Su Jia-chyuan in Taipei on March 27, 2018. Photo: Tyrone Siu, Reuters

‘IMPORTANT PARTNER’: The new guidelines aim to encourage US engagement with Taiwan, which reflects a deepening relationship, the US Department of State said

The US Department of State on Friday issued new guidelines governing US officials’ interactions with their Taiwanese counterparts, a move welcomed by Taipei as turning a new page in bilateral relations.

Shortly before leaving office, then-US secretary of state Mike Pompeo on Jan. 9 announced the cancelation of previous contact guidelines, which he said were “self-imposed restrictions” that attempted to appease the Chinese Communist Party regime in Beijing.

However, the status of the guidelines has been unclear since US President Joe Biden entered the White House.

Asked about the issue during a legislative session on Thursday, Minister of Foreign Affairs Joseph Wu （吳釗燮） said the adjustments could be significant.

The department on Friday said it had issued the new guidelines to “encourage US government engagement with Taiwan that reflects our deepening unofficial relationship.”

The guidelines “liberalize guidance on contacts with Taiwan, consistent with our unofficial relations, and provide clarity throughout the executive branch on effective implementation of our ‘one China’ policy, which is guided by the Taiwan Relations Act, the Three Joint Communiques, and the ‘six assurances,’” it said in a news release.

“The guidance underscores Taiwan is a vibrant democracy, and an important security and economic partner that is also a force for good in the international community,” it said. “The new guidelines have been issued following a review as set forth in the Taiwan Assurance Act.”

The Taiwan Assurance Act, signed into law by then-US president Donald Trump in December last year, requires the US Department of State to review the contact guidelines, in addition to supporting normalized sales of arms to Taiwan and Taiwan’s meaningful participation in international organizations.

The department did not publish the entire content of the new guidelines, and the American Institute in Taiwan said it has no details to offer beyond the department’s statement at the moment.

The new guidelines, which were circulated within US government agencies but not released to the public, reportedly allow US officials to hold regular meetings with their Taiwanese counterparts, including at Taiwan’s representative offices in the US.

The policy would also allow officials to participate in meetings at Twin Oaks, the former residence of Taiwanese ambassadors to the US which is now used for official functions, although they would not be allowed to attend celebrations of Double Ten National Day and other Taiwanese holidays, the Central News Agency reported.

As for whether Taiwan’s president, vice president, premier, vice premier and ministers of defense and foreign affairs — the so-called six high-ranking officials — can visit Washington, Wu said on Thursday that such visits are not covered by the guidelines.

Relaxing the contact guidelines is a move that has bipartisan support in the US, he said.

The revised guidelines aim to reflect the close Taiwan-US interactions of the past few years and relax “untimely” restrictions, the Ministry of Foreign Affairs said in a news release.

The US explained related content to Taiwan prior to its announcement of the guidelines, it said, adding that it welcomes the department’s reaffirmation of its “rock-solid” commitments to Taiwan through action.

The revised guidelines explicitly promote relations with Taiwan, while opening a new page in bilateral ties as the US’ Taiwan Relations Act enters its 42nd year this year, the ministry said.