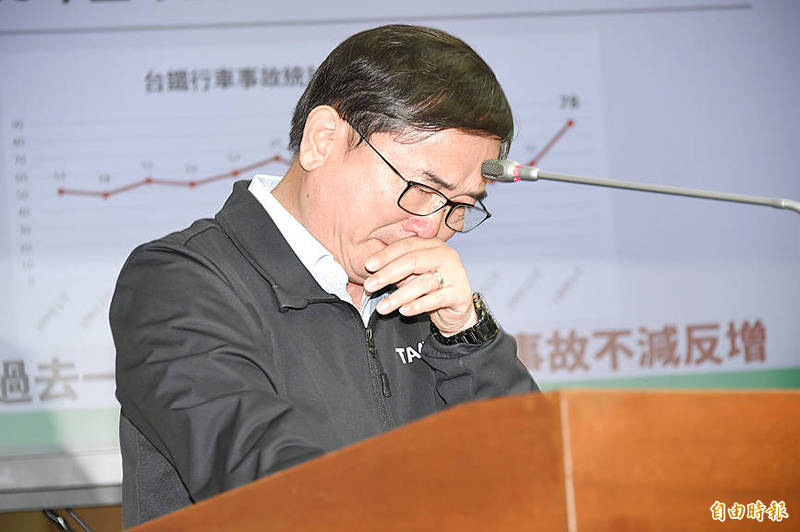 DETECTION DEMANDS: A KMT lawmaker asked what kind of a country would allow another fatal derailment so soon after the Puyuma Express No. 6432 crash in 2018

The Legislative Yuan’s Transportation Committee yesterday passed a motion to form a task force that would require the Taiwan Railways Administration （TRA） to turn in all documents related to the derailment of the Taroko Express No. 408 in Hualien County on Friday last week.

The committee passed the motion and several other resolutions related to the derailment after briefings by Minister of Transportation and Communications Lin Chia-lung （林佳龍） and TRA Acting Director-General Chi Wen-chung （祁文中） about the crash, which killed 50 people and injured more than 200.

Lin and Chi had been at the crash site since the incident to facilitate rescue and restoration work.

Article 45 of the Law Governing the Legislative Yuan’s Power （立法院職權行使法） authorizes the branch to establish a document request committee or an ad hoc task force to request information from government agencies in specific cases.

The TRA within three days is to submit to the task force all documents pertaining to contractors that operated at the site of the derailment in the past five years, including their plans to respond to damage caused by natural or occupational incidents, and to ensure that rail services would not be disrupted, the motion said.

Lin faced harsh criticism at the meeting, with Chinese Nationalist Party （KMT） lawmakers calling him a “co-offender” and asking him to resign.

“The TRA said that it would seek restitution from the contractors and went along with the lies that crane truck driver Lee Yi-hsiang （李義祥） offered,” KMT Legislator Cheng Li-wen （鄭麗文） said. “How can anyone trust any investigation by the TRA or other government agencies?”

“What kind of country would allow a fatal accident so soon after the derailment of Puyuma Express No. 6432 killed 21 people?” Cheng asked, referring to a 2018 crash.

“This is a national disgrace and officials of President Tsai Ing-wen’s （蔡英文） administration should immediately resign,” she said.

“My heart is heavy beyond words whenever I think about how families and relatives of those killed asked for help when I visited them at funeral homes,” Liu said.

As the ruling party, the DPP should bear the responsibility, Liu said, adding that the ministry should — as a bare minimum — establish a comprehensive detection system to alert about intrusions of foreign objects onto railway lines within two or three years.

The TRA is installing detectors on unstable slopes along the line, Lin told the committee, adding that the project is to be completed next year.

“However, we are facing a new situation in which a contractor disobeyed orders by working at a construction site during a holiday,” he said.

On top of the work to mitigate disasters from slope failure, “we have to prevent construction vehicles and other material from affecting rail operations,” he said.

The TRA needs a smart control system to help it manage the 1,065km of railway lines it manages nationwide, Lin said, adding that he would help secure the funding it needs for such a system.

The meeting came after the Taiwan Transportation Safety Board, which is investigating the derailment, on Tuesday presented material unfavorable to Lee.

The crane truck fell onto the tracks about 90 seconds before it was struck by the train, which was about to enter the Cingshuei Tunnel （清水隧道） in Hualien’s Sioulin Township （秀林）, the board said.

Lee told investigators that he alone went to the construction site on Friday, but footage from the truck’s onboard camera showed that other workers were on site, with the truck and several excavators operating, it said.

Lee told investigators that the truck had been parked on a curve uphill from the tracks with the parking brake engaged, but the footage showed that the truck’s engine was turned on and off after it became tangled in bushes shortly before it slid through a treeless patch and onto the tracks, the board said.