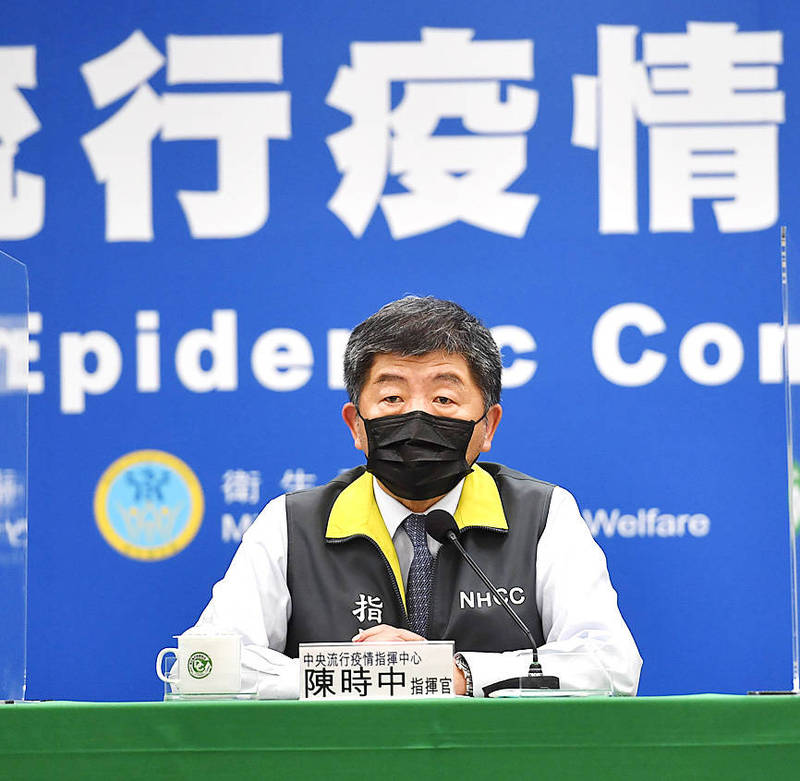 Eligibility for COVID-19 vaccines is to be further expanded to top government officials and workers with higher exposure risk from Monday next week, the Central Epidemic Command Center （CECC） said yesterday.

Minister of Health and Welfare Chen Shih-chung （陳時中）, who heads the center, said that on Tuesday, the rollout list was expanded to include everyone in the first priority group — healthcare facility workers — or about 488,000 people.

“We are now announcing that starting on April 12, the vaccine rollout list will be expanded to all of those in the first, second and third priority groups,” he said.

In the second priority group are top government officials on the national and local levels who oversee disease prevention operations; frontline public health officials; frontline workers in the customs, immigration, quarantine and security sections of airports and ports, he said.

The CECC would ask local health departments to coordinate with COVID-19 hospitals so that outpatient sessions would be added and vaccine quotas increased, it said, adding that hospitals with experience giving flu shots should be recruited to give COVID-19 vaccines.

By Friday next week, there should be 170 vaccination locations, the center said, adding that the Centers for Disease Control’s Web site has location information and appointment registration.

Asked whether Taiwan would still purchase the Pfizer-BioNTech vaccines, Chen said the CECC would likely purchase them if they could arrive before 5.05 million doses of the Moderna vaccine, also an mRNA vaccine, which have already been secured.

Meanwhile, Chen said that from Saturday, travelers who have visited the UK, South Africa or Eswatini within two weeks of entering Taiwan would no longer be required to go to centralized quarantine centers.

Instead, they could quarantine for 14 days at home — as long as there was only one person per housing unit — followed by seven days of self-health management, he said.

However, as the COVID-19 situation has worsened in Brazil, travelers from there still need to quarantine at a centralized center, he said.