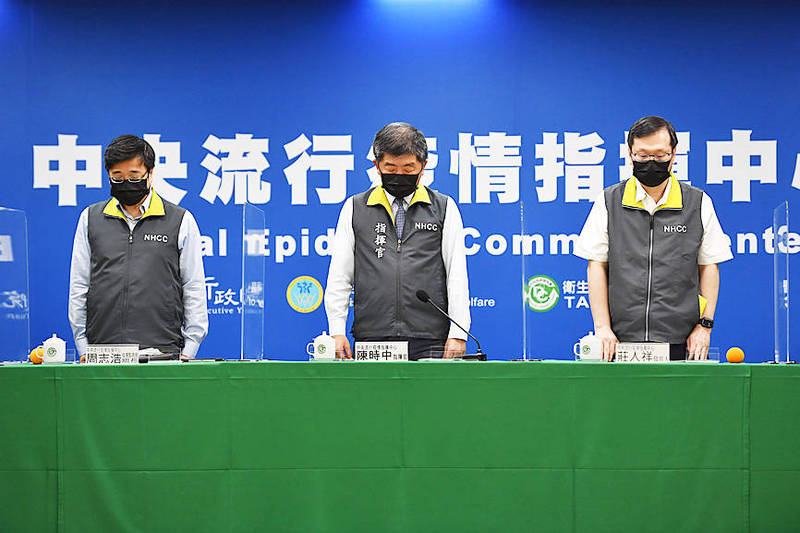 From left: Centers for Disease Control （CDC） Director-General Chou Jih-haw, Minister of Health and Welfare Chen Shih-chung and CDC Deputy Director-General Chuang Jen-hsiang stand for a minute’s silence at the start of a news conference at the Central Epidemic Command Center in Taipei yesterday to mourn the victims of Friday’s train crash in Hualien County. Photo: CNA

COVAX VACCINES EXPECTED: A batch of 199,200 doses of the AstraZeneca jab, sent from Amsterdam, would arrive today, the minister of health and welfare said

The Central Epidemic Command Center （CECC） yesterday confirmed six imported cases of COVID-19 and one new case of a non-serious adverse event after a COVID-19 vaccination.

Centers for Disease Control Deputy Director-General Chuang Jen-hsiang （莊人祥）, who is CECC spokesperson, said that three of the imported cases are Philippine migrant workers, who are in their 20s or 30s.

One of them arrived in Taiwan on March 10 and tested negative after finishing quarantine on Tuesday last week, but tested positive in a paid test on Thursday, Chuang said.

The other two women arrived on March 19 and tested positive after finishing quarantine on Thursday, he said.

All three tested negative in subsequent tests, he said, adding that their test results showed no IgM antibodies, but did show IgG antibodies, which means that they had likely been infected earlier.

The other three cases are Indonesian crew members of a shipping vessel, who are in their 20s to 40s, Chuang said, adding that all other crew members of the vessel have been in home quarantine since March 13, when the boat docked in Taiwan.

All crew members were administered paid tests on Thursday, and the results showed that three of them were infected, he said.

Two of the three cases from Indonesia tested negative in subsequent tests, and the result of the other man’s subsequent test showed a relatively low viral load, no IgM antibodies, but IgG antibodies, Chuang said, adding that this suggests a prior infection.

Forty-nine crew members were in close contact with the three cases, Chuang said.

Two of the contacts, who shared a room with the cases, were put under home isolation, while the others must practice self-health management, he added.

A total of 1,045 cases of the virus have been confirmed in Taiwan, including 929 imported cases, CECC statistics showed.

Forty-three people are in hospital with the virus, it showed.

In other developments, 606 people received a COVID-19 vaccine on Friday, despite it being the first day of the Tomb Sweeping Day long weekend, bringing the total number of doses administered in Taiwan to 17,056, Chuang said.

Minister of Health and Welfare Chen Shih-chung （陳時中）, who heads the center, said that the first batch of COVID-19 vaccines allocated through the global vaccine sharing program COVAX would be delivered today.

The 199,200 doses of AstraZeneca vaccine are being shipped from Amsterdam, he said.