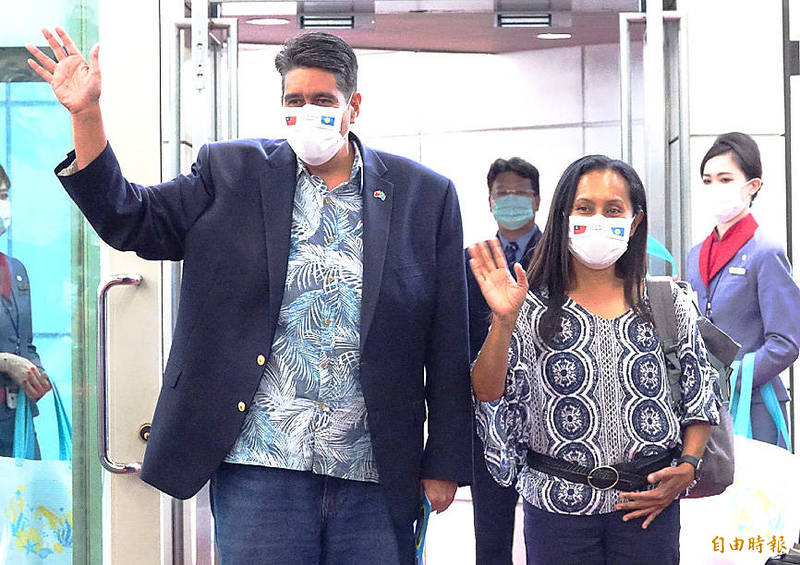 By Sherry Hsiao / Staff reporter, with CNA and AFP

Taiwan and Palau yesterday launched what is being billed as the Asia-Pacific region’s first COVID-19 “travel bubble,” as the diplomatic allies seek to kick-start their battered tourist industries after successfully keeping infections at bay.

Excited Taiwanese tourists arrived at Taiwan Taoyuan International Airport, checking in five hours before their afternoon flight so that they could be tested for COVID-19.

All tested negative for the virus before their departure, the Central Epidemic Command Center （CECC） said, adding that the flight carried 123 passengers, 23 of whom were members of a diplomatic delegation from Palau.

One of the passengers, Eleanor Jiang （藍諾）, said that she was looking forward to visiting Palau’s popular sites, including the Milky Way and Jellyfish Lake, which have attractions that cannot be found in Taiwan.

Although the four-day tour was somewhat expensive, costing her NT$70,000, it was worth it, she added.

Minister of Health and Welfare Chen Shih-chung （陳時中）, who heads the center, oversaw testing at the airport.

Doctors were stationed at the airport in case any passengers tested positive, he said.

If there had been positive cases, an ambulance would have transported them to a hospital, he added.

After their arrival in Palau, the tourists would travel in groups and would be barred from making individual excursions, Chen said, adding that this and other precautions were out of respect for Palauans’ health.

Contact with residents in Palau would be kept to a minimum, with tourists staying at designated hotels, eating in separate restaurants and shopping at set times.

“We do not wish to bring any potential danger to another safe nation,” just as Taiwanese would not want others to bring “unsafe factors” to Taiwan, he said.

Among those taking yesterday’s flight with the first batch of tourists was Palauan President Surangel Whipps Jr, who made a five-day visit to Taiwan ahead of the launch.

The “travel bubble” arrangement was first announced by the government on March 17.

The plan is to eventually have 16 flights per week on the route, a major lifeline for Palau’s economy, which before the COVID-19 pandemic relied on tourism for more than half of its GDP.

Most of the travel is expected to consist of Taiwanese heading to Palau.

A group of tourists pose at Taiwan Taoyuan International Airport yesterday before boarding a flight to Palau as part of the Taiwan-Palau “travel bubble.” Photo: CNA