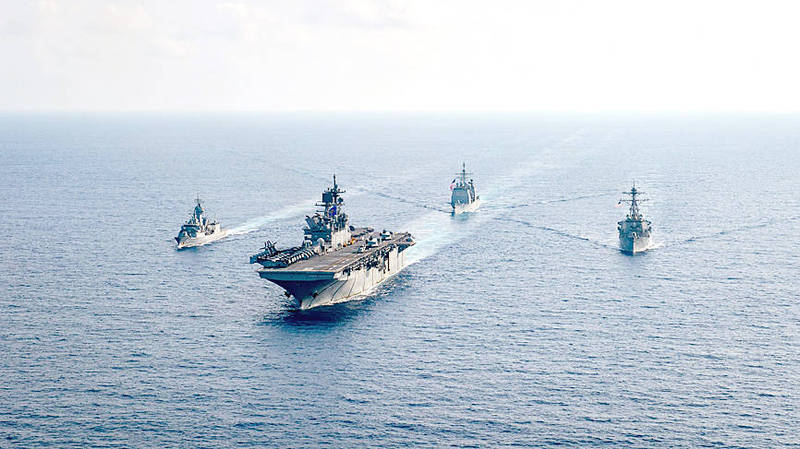 NO AGREEMENT YET: Australia, which hails its involvement in every major US conflict over the past century, has yet to officially commit to aiding Taiwan

The US is undertaking “strategic planning” with ally Australia to consider potential joint responses to a war over Taiwan, US President Joe Biden’s top diplomat in Canberra said yesterday.

“We’re committed as allies to working together — not only in making our militaries interoperable and functioning well together, but also in strategic planning,” Michael Goldman, charge d’affaires ad interim at the US embassy in Canberra, said in an Australian National University podcast, when asked about a potential role for Australia in a Taiwan contingency.

“And when you look at strategic planning, it covers the range of contingencies that you’ve mentioned, of which Taiwan is obviously an important component,” Goldman added.

While Australia regularly hails its history of being involved in every major US conflict over the past century, it has yet to officially commit to taking part in a potential conflict over Taiwan.

The US also makes no iron-clad guarantees it will come to Taiwan’s defense if China makes good on threats to invade, only agreeing to help its capacity for self-defense.

China has stepped up military exercises around Taiwan over the past few years as Washington bolsters diplomatic ties with Taipei.

The comments risk inflaming US-China relations as Beijing hits back hard over criticism from Western countries over everything from allegations of forced labor in Xinjiang and cracking down on democracy advocates in Hong Kong to increased intimidation of Taiwan.

Chinese President Xi Jinping’s （習近平） government views all of them as “internal matters,” and has begun to lash out at companies that take a position on them.

China has also hit Australia with trade reprisals since Australian Prime Minister Scott Morrison’s government called for independent investigators to be allowed into Wuhan, China, to probe the origins of the COVID-19 pandemic a year ago.

US Secretary of State Antony Blinken this week said that Beijing “apparently helped to write” a WHO report studying the origins of COVID-19.

Goldman, who is heading the embassy until Washington replaces former US ambassador to Australia Arthur Culvahouse, who left in January, also backed up comments by US National Security Council Coordinator for the Indo-Pacific Kurt Campbell.

In a newspaper interview last month, Campbell said that US relations with China would not improve until Beijing stops its economic coercion against Australia.

Other nations including Japan, the Philippines and Vietnam have also been targeted with economic action by Beijing, he said.

“We really can’t expect to have substantial improvements in our relationship with China while it’s holding hostage the economies of our partner nations,” Goldman said.