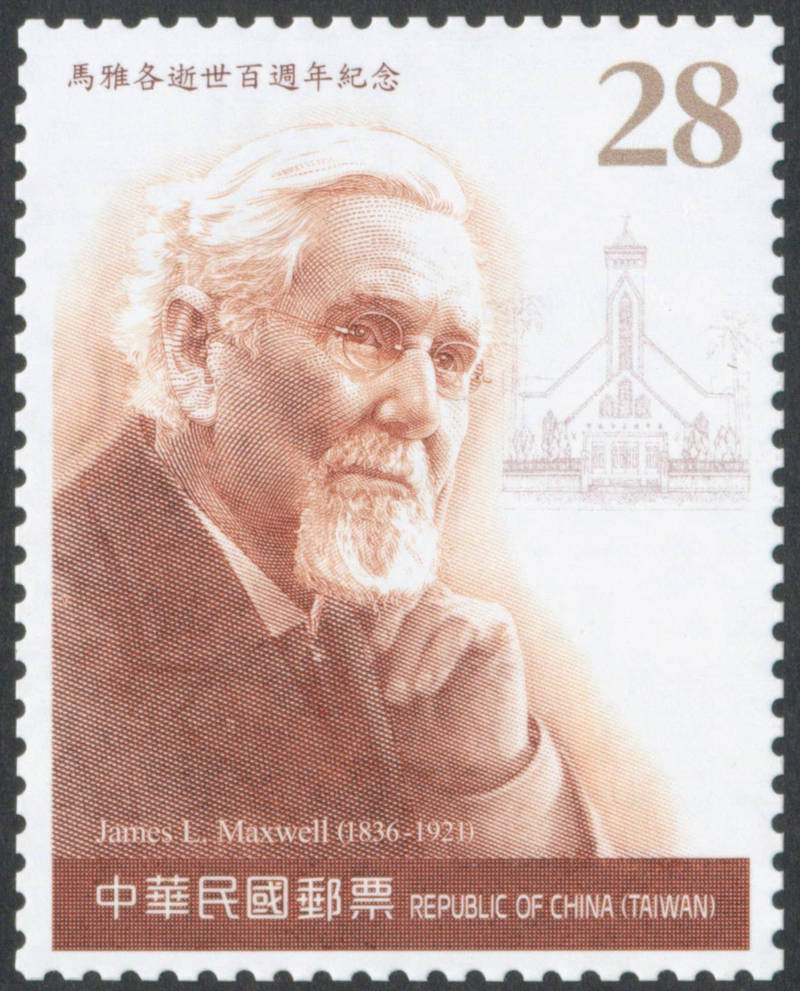 A stamp featuring James Laidlaw Maxwell, the first Presbyterian missionary to visit Taiwan, is to be released on Friday to commemorate the centennial of his death, Chunghwa Post said yesterday.

“Maxwell, who was known as the father of medical missionaries in Taiwan, dedicated his life to assisting patients, and training missionaries and doctors. To commemorate his contributions to Taiwan, we are publishing this memorial stamp, featuring a portrait of Maxwell and the Tai-Peng-Keng Maxwell Memorial Church,” the state-owned firm said.

The stamp is to have a face value of NT$28 and will be available for purchase at post offices nationwide, the Postal Museum and the online Postal Stamps Mall （stamp.post.gov.tw）, the company said.

First day covers and other products related to the stamp would also be available for purchase, it said.

The Church of England sent Maxwell to Taiwan and he arrived at the Port of Kaohsiung in May 1865, according to the Web site of the Tai-Peng-Keng Maxwell Memorial Church.

He then traveled to Tainan, which was then the capital, to begin his work as a medical missionary, it says.

Maxwell on June 16, 1865, opened the first Western-style clinic in the nation in Tainan’s Kansi Street, with the front of the building serving as a church and the rest as his clinic, the Web site says.

Over the years Maxwell’s missionary work gradually expanded from Tainan to Kaohsiung, Pingtung County and communities of plains Aborigines, according to the Ministry of the Interior’s National Religion Information Network.

He used the Church Romanization system to translate the New Testament into Hoklo （also known as Taiwanese）.

Maxwell in 1881 donated a printing press to Sinlo Bookroom, which was used to print the Taiwan Church News, the nation’s first newspaper.