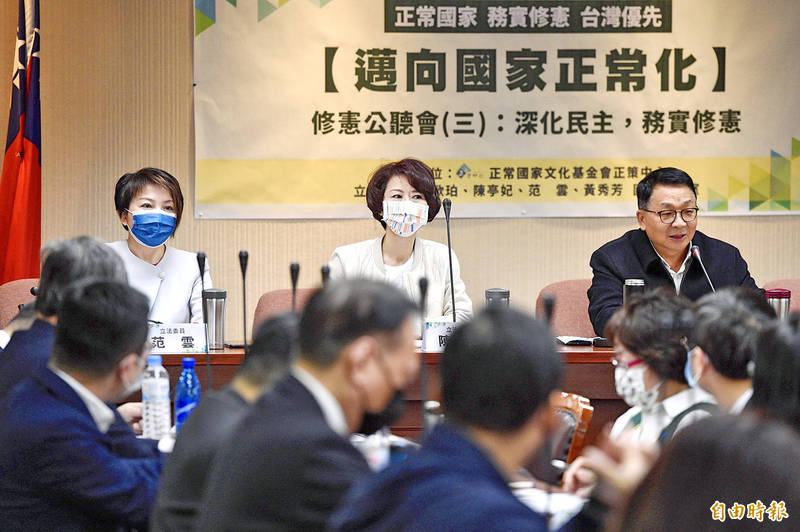 CLEAR NATIONAL IDENTITY: DPP lawmakers told a public hearing that major advances would be made in the next legislative session regarding constitutional amendments

At a public hearing at the legislature yesterday on “normalizing” the nation, Democratic Progressive Party （DPP） legislators proposed changing the national anthem and the Constitution.

DPP lawmakers who hosted the hearing all belonged to the supposedly disbanded faction headed by Legislative Speaker You Si-kun.

DPP Legislator Chen Ou-po （陳歐珀） said that major progress would be made on constitutional amendments in the next legislative session, adding that he had already held numerous conferences on the amendments in Yilan County.

“People should not need to struggle to say where they are from. It is crucial that we draft a constitution that is made with Taiwan in mind,” he said.

The Additional Articles of the Constitution of the Republic of China （中華民國憲法增修條文） were written “to meet the requisites of the nation prior to national unification,” he said.

This should be amended to state that the articles are “to meet the requisites of the nation’s development,” he said.

Changes to the national flag, emblem and anthem could also be discussed, he said, adding that legislators had already passed a resolution requesting that the Ministry of the Interior deliberate on changing the national emblem.

DPP Legislator Fan Yun （范雲） responded to criticism over a proposal to change the anthem, saying that the Chinese Nationalist Party （KMT） had changed the anthem several times.

At its founding, the Republic of China’s （ROC） national anthem had been the Song of Five Races Under One Union （五族共和歌）, which was changed four years later to the Song to the Auspicious Cloud （卿雲歌）, and was later changed again to a song that had initially been written for the ROC Military Academy （then known as the Whampoa Military Academy）, she said.

Therefore, changing a country’s national anthem is not something that cannot be done, she said.

Fan said that she has long been an advocate for normalizing the nation, and has called for the Control Yuan and Examination Yuan to be abolished, and portraits of ROC cofounder Sun Yat-sen （孫逸仙） to be removed, among other changes.

“The current Constitution is completely out of touch with the times. The nation’s sovereignty extends to Taiwan proper, as well as Penghu, Kinmen and Lienchiang counties — it most definitely does not include any Chinese territory,” DPP Legislator Huang Hsiu-fang （黃秀芳） said.

One problem with the anthem is that it requires the singer to profess allegiance to “my party” （吾黨） — meaning the KMT, National Dong Hwa University assistant professor Hsu Chien-jung （許建榮） said.

Meanwhile, Liang Kuang-chung （梁光中）, director-general of the Ministry of Foreign Affairs’ Department of Treaty and Legal Affairs, said that in addition to changing references to unification in the Constitution, lawmakers are also proposing that references to “existing national boundaries,” be changed to “areas where the Constitution has effect.”

This would reflect the abolition of the country’s past provincial hierarchy, and give precedence to public opinion regarding international affairs involving the country, he said.

Given the highly sensitive nature of the issue, he said that he hopes lawmakers across party lines will share their opinions.