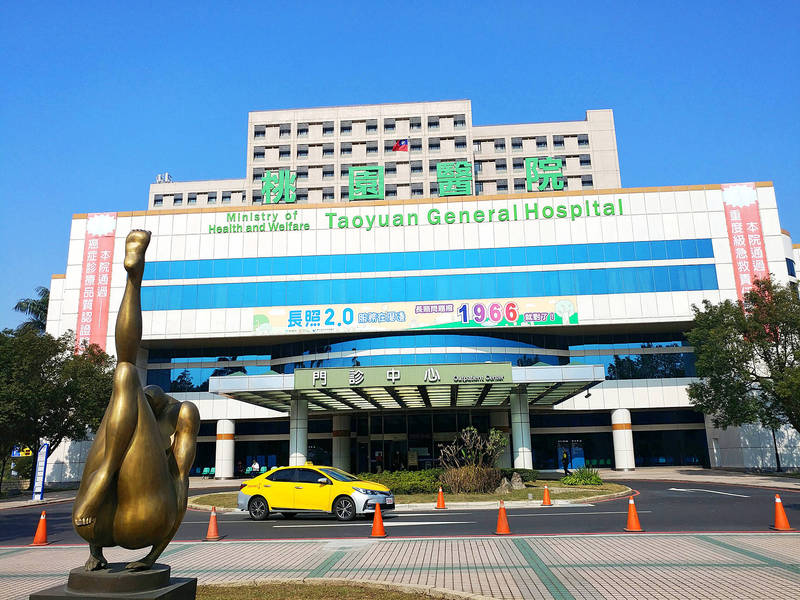 The Ministry of Health and Welfare’s Taoyuan General Hospital is pictured yesterday, as Taoyuan Mayor Cheng Wen-tsan pledged to support medical workers in the midst of a COVID-19 outbreak. Photo: CNA

FLU SHOTS: The Central Epidemic Command Center said that, starting on Saturday, government-funded flu vaccines are to be available for everyone

The Central Epidemic Command Center （CECC） yesterday reported one new imported case of COVID-19, and said that 3,262 people associated with a cluster infection at Taoyuan General Hospital have been placed in home isolation.

Yesterday, there were no new domestic cases, said Minister of Health and Welfare Chen Shih-chung （陳時中）, who heads the center.

However, on Jan. 6, a Taiwanese man in his 40s tested positive for COVID-19 while in Mexico, Chen said, adding that the man quarantined in a hotel and then a hospital before gaining approval on Saturday last week to return to Taiwan for treatment on a medical charter flight.

On Sunday, after entering Taiwan, the man was isolated at a hospital and the hospital test for COVID-19 returned positive yesterday, Chen added.

On Sunday evening, the center announced an expanded isolation order for people discharged from Taoyuan General Hospital between Jan. 6 and Tuesday last week, as well as for those they live with and their caregivers.

At that time, Chen said that about 5,000 people were expected to be placed in isolation due to their proximity to the hospital cluster.

Yesterday, he said that 3,262 people had been placed in isolation: 475 hospital employees, 305 local residents who had close contact with confirmed cases and 2,481 people recalled as part of the expanded isolation order.

The infection source of the two latest cases in the hospital cluster — a married couple in their 60s — remains unknown, but the tests for 195 people who might have been exposed to them at the hospital returned negative, while antibody tests are still being conducted, Chen said.

Meanwhile, the center said that, starting on Saturday, about 400,000 government-funded flu vaccines are to be available for everyone.

About 6 million doses had as of Monday been administrated, and 410,000 more purchased to meet the high demand of the start of the flu season, Chen said.

“People in priority groups who are eligible now, but who have not received the shot, should get one before Saturday,” he said.

Anyone who has not received a flu shot in the past six months would be eligible, the center said.

Advisory Committee on Immunization Practices convener Lee Ping-ing （李秉穎） said that about 350,000 doses of the government’s supply are a new type of vaccine imported from the US.

The new vaccine — the Flublok quadrivalent vaccine — is an inactivated vaccine like previous flu vaccines, except that it is a non-egg-based recombinant flu vaccine.

The new vaccine is only to be given to people aged 18 or older, as there have not been enough clinical studies on children and adolescents, he said.

People who have already received a flu shot this season do not need to get the new shot, he said.

People can get the Flublok vaccine with other vaccines, such as a pneumococcal vaccine, but should preferably get the shot in a different body part, he said.

Some people might experience mild muscle pain or fever after getting vaccinated, Chen said, adding that people who are self-managing their health due to COVID-19 should wait until the end of the seven days to get vaccinated, or they might confuse a side effect for a symptom.