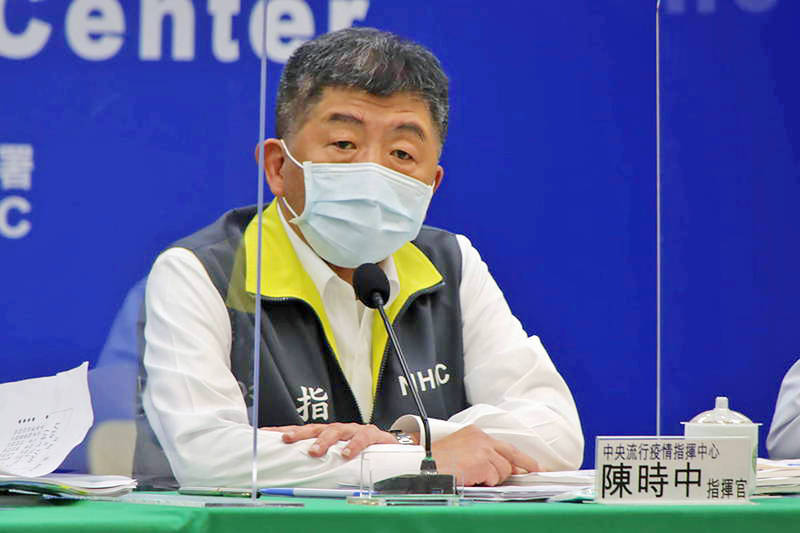 FAMILY UNIT: The CECC warned that the eldest sister of the latest case, who also has COVID-19, visited Taoyuan’s Chungping evening market on Tuesday and Wednesday

The woman is the main caregiver of her elderly father, who had been hospitalized earlier this month and was treated by a nurse （case No. 852） from Monday to Thursday last week, he said, adding that the nurse tested positive on Saturday last week.

Chen said that the woman tested negative on Jan. 11 and Sunday last week, and had been placed in home isolation with her father and two older sisters.

As the woman’s father and her eldest sister （case No. 882） were confirmed to have COVID-19 on Friday, she was tested for the third time and the result came back positive yesterday, he said, adding that contact tracing is being conducted.

The eldest sister visited Taoyuan’s Chungping evening market （仲平黃昏市場） on Tuesday and Wednesday, and the exact times are being investigated, Chen said.

He urged people who visited the market on those two evenings to practice self-health management until Feb. 3, saying that they should wear a mask and seek medical attention or call the center’s 1922 hotline immediately if they develop COVID-19-like symptoms.

The middle sister tested negative on Jan. 11, on Sunday last week and on Friday, so she would not be tested again unless she shows symptoms or if it is necessary when she completes isolation, Chen said.

He said that 967 people associated with the hospital cluster, including 403 hospital employees, have been put in isolation — the largest group of people in Taiwan to be placed in isolation since the outbreak of COVID-19.

A large “firewall” has been built — by putting people who have been exposed to confirmed cases under isolation — in an effort to contain the virus, Chen said, adding that the cluster would be deemed under control if new cases are among individuals “inside the firewall.”

However, if new cases are found “outside the firewall” and the possible infection source cannot be traced, the situation would become an urgent concern, he added.

Of the two imported cases reported yesterday, one was a British teenager who tested positive in the UK on Dec. 28 last year.

He self-isolated for 10 days and provided a negative polymerase chain reaction （PCR） result obtained within three days before boarding a plane to Taiwan, and arrived on Wednesday, Chen said.

He did not have symptoms during quarantine, but after he was tested on Thursday in a special project for travelers from the UK, his result came back positive yesterday, he said.

The other was a US student, who arrived in Taiwan on Dec. 31 last year, Chen said, adding that she had provided a negative PCR result from Dec. 24 last year, but she tested positive in a paid test on Thursday after completing 14 days of quarantine at a hotel.